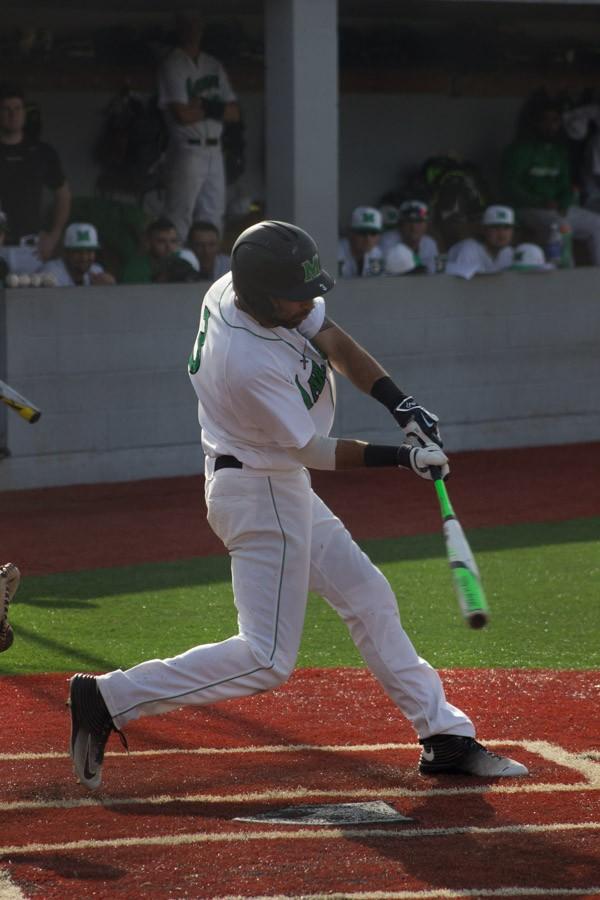 Marshall second baseman DJ Gee swings at a pitch in a game earlier this season.

The Marshall University baseball team is off to a great start this season as they’ve taken all but one series so far during conference play. Talent from players can take a team far, but it’s the coaching that takes teams to the next level.

Head coach Jeff Waggoner is in his 10th season with the Herd and has achieved numerous accomplishments as a coach. He’s helped players break school records, personal records and enter the MLB draft.

The Alliance, Ohio native didn’t always have his eyes set on baseball though. After receiving a sports management degree from Cleveland State University, he went on to receive his masters in educational psychology from the College of Saint Rose.

“Actually when I was in graduate school at the college of St. Rose, which is a small Catholic school in Albany, New York, I actually taught,” Waggoner said. “I was in-between teaching and going into coaching and got the opportunity from Tom Walter at George Washington University, who’s now at Wake Forrest, he gave me the opportunity to start coaching. So I coached summer ball, which kind of led the way, and I couldn’t get off the field. I wanted to stay as a coach, so here I am.”

Waggoner has compiled a 197-288-1 record during his time at Marshall and his 197 victories are the second most in program history. But what he’s most known for is his ability to get players to the next level.

With so many accomplishments, Waggoner could continue to look elsewhere as he continues his coaching career, but he said he finds something special in Conference USA.

“First off it’s a great conference,” Waggoner said, “and anytime you get a chance to coach in Conference USA it’s a great honor and a great university. We get great kids here and it’s close to my hometown, so I think both of those combined is what’s really kept me here.”

However, Waggoner said he doesn’t really have the time to think about leaving, especially during the season.

“I look at it one year at a time. All I can focus on is this team and worry about this program right now. I don’t really look too far ahead.”

Right now Waggoner is in pursuit to leading his team to the Conference USA tournament, which the team hasn’t been to since 2008, when he led his team to 30 wins, the most in program history.

With an overall record of 19-15 and 18 games left to play in the regular season, Waggoner might just achieve yet another goal of leading his team past 30 wins and receiving another spot in the Conference USA tournament.