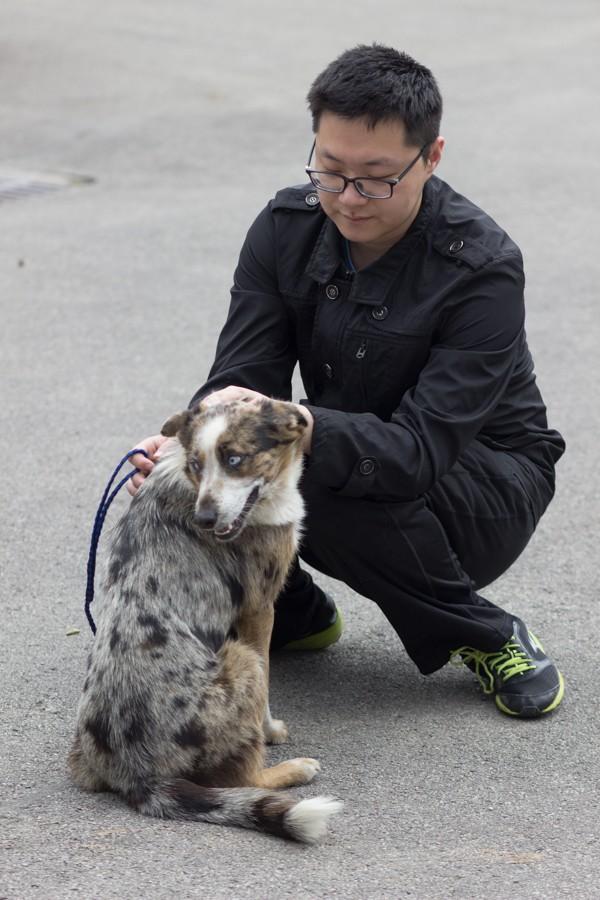 INTO student Bob gives a dog a chance to stretch their legs outside the Huntington Cabell Wayne Animal Control Shelter, April 11, 2016.

A class aimed at helping animals was offered to Marshall University INTO students for the first time this spring. The course, titled “INTO Helping Animals,” is an elective course that gives students the opportunity to practice their English while helping animals at the Huntington Cabell Wayne Animal Shelter.
INTO Helping Animals takes place once a week for two hours. During the class, students typically walk dogs, play with cats, bathe animals and clean cages.
The key portion of the course is the group project, in which the students identify a need of the shelter and address it. When the students aren’t focusing on their group project, they work on reflection activities
Some of the activities include vocabulary journals, reflection questions, and writing assignments. For example, the students have been asked to discuss what may be causing the animal shelter’s overpopulation and to research the illnesses the animals have.
The class consists of 10 INTO students. All of the students in the course only have English classes aside from this one as a part of their academic English program.
The course professor Lindsey Anderson said she likes the class because it is fun, but still reinforces the students’ English skills.
Anderson said that there was an issue with transportation to and from the shelter. One of the requirements of the course was to have reliable transportation, but most students don’t.
As the semester went on, the students have figured out ways to get to the shelter. Anderson takes some students with her, some students carpool and some bicycle.
Anderson said her goals for the students are for them to improve their English, for them to feel like a part of the community and for the to learn about themselves.
One of the students taking the INTO Helping Animals course is graduate student Ilgan Secerli, 25. Secerli is from Turkey and has been living in the Unites States for a little over a year.
Serceli completed her undergraduate degree focusing on music in Turkey and plans to continue studying music in the fall. Serceli said that she takes care of the animals at the shelter.
She said she mostly takes dogs for walks and plays with cats but occasionally helps with normal shelter duties like cleaning the cages, which was new for her.
“It’s a very new experience for me,” Serceli said. “I love animals, but I had never been to an animal shelter here or even in my country.”
Still, Serceli said that the class wasn’t everything that she expected it to be.
“I was expecting the shelter to be cleaner and to offer more opportunities to the animals,” Serceli said.
On the first day at the shelter, Serceli said she was surprised because as soon as the cages were opened, the animals went wild and it was hard to get the back together. Both Anderson and Serceli said that the employee at the shelter always need more help.
Serceli was so inspired by the course that she visited an animal shelter in Cincinnati over spring break.
According to Serceli, the only drawback of the class is that the homework is difficult: she said the vocabulary is hard to remember.
Serceli said she wishes students could help the animals more but they are not trained to do so. She said she believes the class benefits the students more than it does the animals because they aren’t able to completely care for them.
The animals at the shelter come in from several different circumstances. Some are forcefully taken from their homes because they are being neglected and some are donated when the owners can no longer take care of them.
The INTO Helping Animals takes place every Monday from 12 p.m. to 2.p.m. until the end of the semester.
Sage Shavers can be contacted at Sh[email protected]