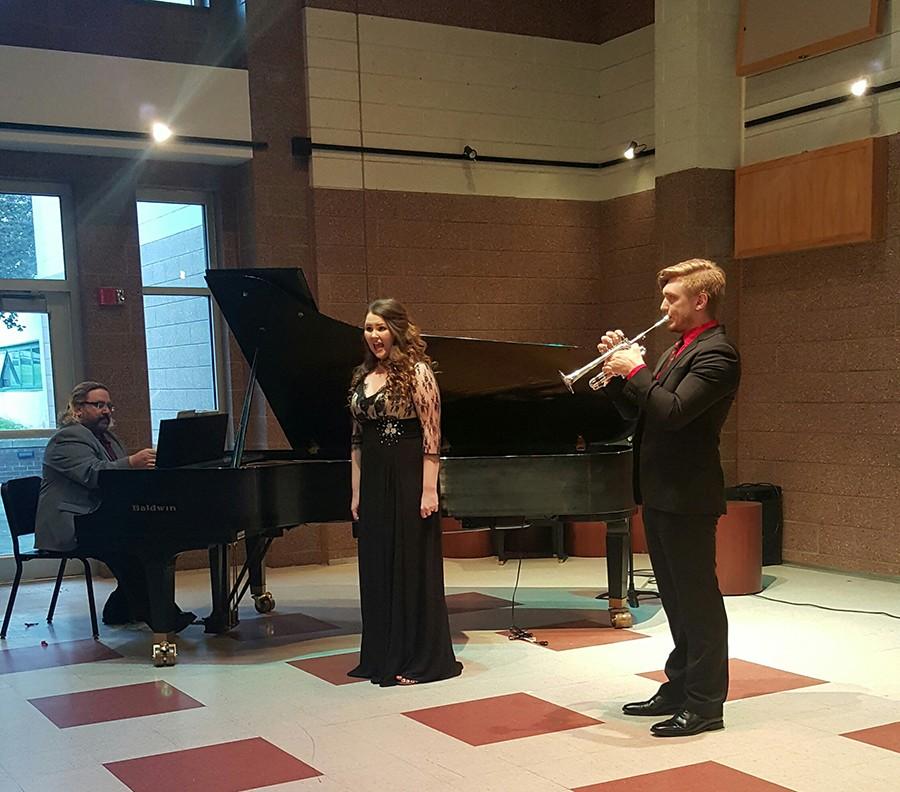 Trumpeter Justin Bahawi performed his perfected studio selections that were three years in the making at his recital Tuesday night at the Jomie Jazz Center.

The Huntington native is a trumpet performance major at the Marshall University School of Music and Theatre.

“I chose this direction because I like to perform and inspire others to enjoy music as much as I do,” Bahawi said.

He started playing the trumpet 12 years ago and decided to make it a part of his career path shortly after.

“Since I started at a younger age, I had the opportunity to explore what music had in store,” Bahawi said. “When I saw my role model Chris Botti live in concert, I knew that’s what I wanted to do,” Bahawi said.

During his three years at Marshall, Bahawi has studied trumpet under Dr. Martin Saunders.

“Justin is a very fine trumpeter,” Saunders said.  “He has an extremely high work ethic and is a leader among his peers.”

During Tuesday’s night’s performance Bahawi played solo and accompanied pieces, which featured his range of talents.

He also had to switch instruments for a piece that required a piccolo trumpet, which is pitched an octave higher than the normal B-flat trumpet and in the key of A.

“I chose this program because it shows a variety of what the trumpet can do,” Bahawi said.  “For instance it shows the difficulty of playing an accompanied piece and keeping the tempo steady without an accompanist playing with you, and then the difficulty of switching from a b-flat trumpet to a piccolo trumpet, while playing a piece with a vocalist and using body language to communicate between one another.”

Saunders said Bahawi drive and willingness to challenge himself have not gone unnoticed.

“I believe that versatility is key to being a viable professional musician in the 21st century, and Justin exemplifies this through diligent preparation of solo works in varying styles, and through performing with various diverse ensembles and performance situations,” Saunders said.

Bahawi said he is thankful for Saunders’ help and guidance through the years and for helping him to become a better musician.

He also expressed his gratitude to pianist Mark Smith and vocalist Christa Navy for accompanying him during his junior recital.

After college, Bahawi plans to join the United States Navy or Air Force which he says will give him the opportunity to travel and spread the passion of music.