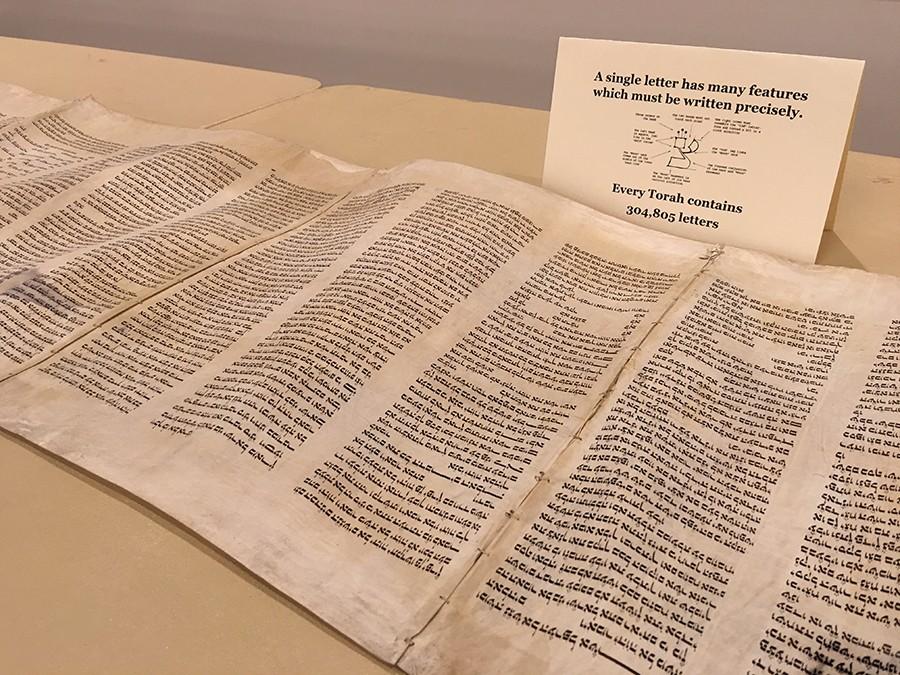 A Torah Scroll that was purchased in Israel was on display at the Hell Yes event Monday night hosted by Ratio Christi.

Students learned about the greatest misconceptions surrounding the concept of what happens after death, with a specific concentration on the truth about Hell.

The “Hell Yes: The Terrifying Truth” event was hosted by Ratio Christi on Monday night in the Memorial Student Center.

The speaker at the event was Greg Koukl, an adjunct professor at Biola University in Los Angeles, has spent his life working to educate others about the Christian faith.

Koukl has hosted his own radio talk show for 25 years, contributed to 14 books, been featured in numerous new stories and been involved in televised debates with atheists.

Koukl emphasized that his purpose for speaking at the event was not to convert anyone to his faith because he understood that the audience was most likely mixed in convictions. He said he was simply there to tell about faith’s influence on his life.

“I am here tonight because my life was changed by an ancient teacher,” Koukl said. “About 45 years ago, when I was a college student, I began thinking about the claims Jesus made about himself, and about his claim on my life, and I ultimately decided to follow him… My goal here tonight is not to convert you. If something I say can get you thinking about something important, then I will be happy.”

Koukl said one must consider what comes after death because you never know when you may die, despite your age and health.

“I am almost 66, and I’m not dying anytime soon,” Koukl said. “But my question is: How do you know that? Maybe statistics are on your side, but sometimes we are blindsided. We are sometimes caught by surprise.”

Koukl related his views of life after death to the movie series “The Lonesome Dove.”

“The movie really got me thinking about the concept of death and what happens after we die,” Koukl said. “This film brought three ideas about death to my mind: the suddenness of death, the finality of death and a strange surprise that some people are going to face after death… Unfinished business will remain forever unfinished.”

Koukl addressed false views of Hell, the biggest of which was the fact that both religious and non-religious people sometimes try to deny that Hell even exists.

“Religious people don’t like Hell either,” Koukl said. “One false view is that there is no place like that. I suspect they think that because they don’t like the idea of a place like Hell. It’s too archaic, but if something was true thousands of years ago, it’s safe to say that it’s true today.”

John Mays, chapter director of Ratio Christi on Marshall University’s campus, said the group has liked to bring in well-known speakers at least once every semester.

“We have brought in a guest speaker since our inception in 2013,” Mays said. “The first year we brought Frank Turek, last year J. Warner Wallace and this year, obviously, Greg Koukl. So, it really wasn’t our intention to bring someone to specifically talk about hell, but to bring in internationally known speakers that defend the truth of Christianity.”

The event also featured a question and answer period, as well as a viewing of a three-century old Torah Scroll that came from Israel.