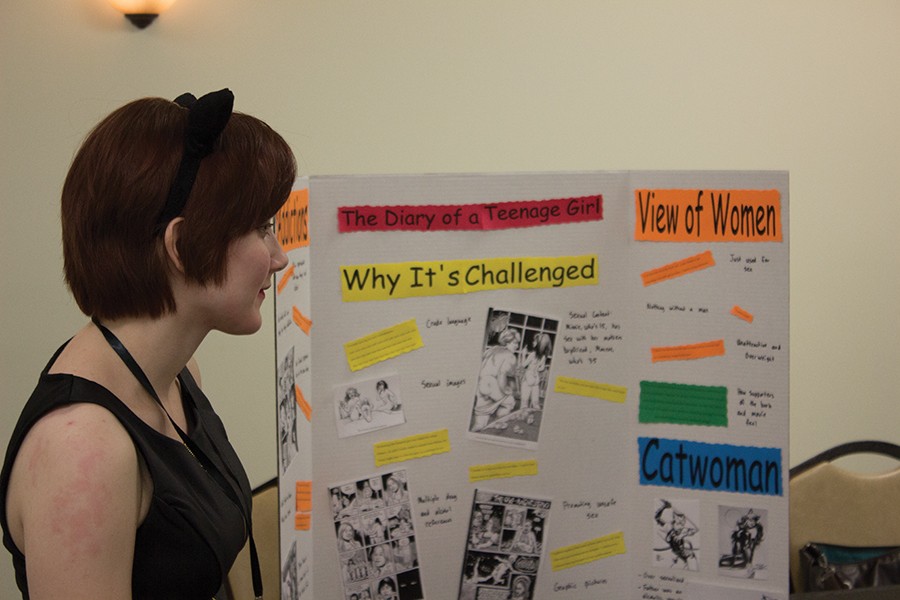 Elizabeth Hance speaks about the graphich novel "The Diary of a Teenage Girl" at the Heros and Villains of Healthcare Comic-Con in the Memorial Student Center, April 18, 2016.

The honors seminar “Heroes and Villains of Healthcare” hosted an Honors Comic Book Convention Monday in room BE5 of the Memorial Student Center.

The honors seminar is focused on pop culture representations of healthcare issues, such as mental health, cancer and disabilities.

Course professor Britani Black said for the final project in the course, students had to pick a comic from the banned comics list and create an art project about it to present at the convention.

Black said the comic convention showed there are lots of different representations of healthcare, like psychological health, that can often be overlooked in popular culture.

“A lot of people watch these movies that the comics are based off of,” Black said. “They go see them. You look at ‘Deadpool,’ it’s like one of the biggest movies right now. So, it just kind of lets you see that there’s more to these books, there’s more to the issues in them.”

Black said the comic convention also built a conversation about censorship. All the comics the students presented on had either been banned or challenged by libraries, students, etc.

“So this kind of sparks that conversation of why are we trying to still censor books in this day and age, what does that mean,” Black said.

Elementary education major and student in the honors seminar Megan Stell chose “The Walking Dead” for her banned comic. Stell made a collage of different frames of the comic that showed language, violence and graphic content.

“It’s important to show why comics have material that could be banned,” Stell said. “Parents should know what the content should be about before they let their children pick up any comic.”

Applied math major and student in the honors seminar Elizabeth Hance chose “The Diary of a Teenage Girl” for her project.

Hance said the comic she chose generally degrades women and normalizes unsafe sex and drug use.

“I feel like it’s rightfully challenged and doesn’t really have that many redeemable qualities,” Hance said.

Along with the students’ art projects, there was also a table where students could play a video game.

Marshall electronic engineer Ryan Adkins was facilitating the game table where students had to work with five or six other people to reach a common goal within a starship enterprise.

“It just kind of facilitates a discussion about space combat and how health issues, medical issues are portrayed,” Adkins said.

General master’s student in the psychology department Casey Collins said the physicality of playing the game was also important because the group of players were all working together toward a common goal.

“Right now we’re in a social situation, we’re all having to work together, and that’s really important for a lot of problems that people have,” Collins said, specifically referencing social anxiety.

Black said her honors seminar students were nervous about presenting their projects at the convention, but the comic convention is something different and something students don’t get in a lot of classes.