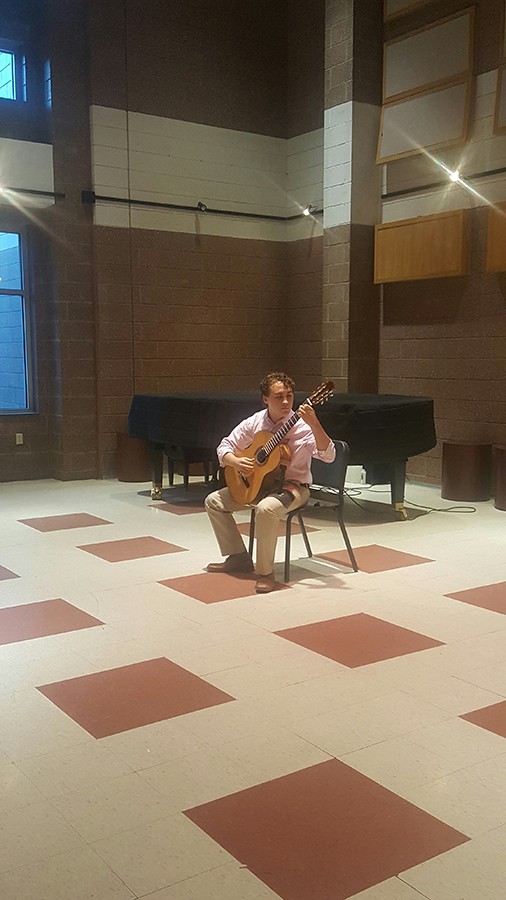 Marshall’s Guitar Studio presented a compilation of solo performances for the public Thursday night in the Jomie Jazz Forum, featuring an original work by one of its own.
The stylistically diverse pieces were chosen by each student in the studio class which is taught by Dr. Julio Ribeiro Alves.
“It is my immense pleasure to have this recital,” Alves said. “Students have worked very hard throughout the semester on many pieces, and they made these selections of the ones they most like to play.”
With this semester drawing to a close, some student performers said they feel more enabled by the pressure.
“I draw inspiration from day-to-day life,” junior James Stamm said. “You kind of have to make some sort of parallel between what you are going through and when you perform, so right now it’s the stress with finals coming up.”
Stamm, a guitar performance and composition double-major, played two songs during the show, one of which was his original work.
“The song is about my friend’s kid; I call him my nephew,” Stamm said. “He and I were up late one night hanging out and started to play some of the material you can hear in the piece. So when it came time to compose something for my composition recital I pulled from that beautiful theme that we came up with.”
The tune, “Logan’s Lullaby,” was composed as a duet, so Stamm was joined by Kyle Levisay for its presentation Thursday night.
The duo has been performing together since their freshman year at Marshall.
“We started the program together and then in the fall we did a duo master class together, which was really nice,” Stamm said. “So we kind of got our foot out the door during that.”
The Spring studio recital also featured performances from Erik Anderson, Mason Anderson, Benjamin Baker, Jason Dandelet, Morgan Finley, Jonathan Garrett Gilmore, Chase Mayo, Jeremy Paistel, Dewey Spaulding, Jonathan Thorne and Kayla Wilson.