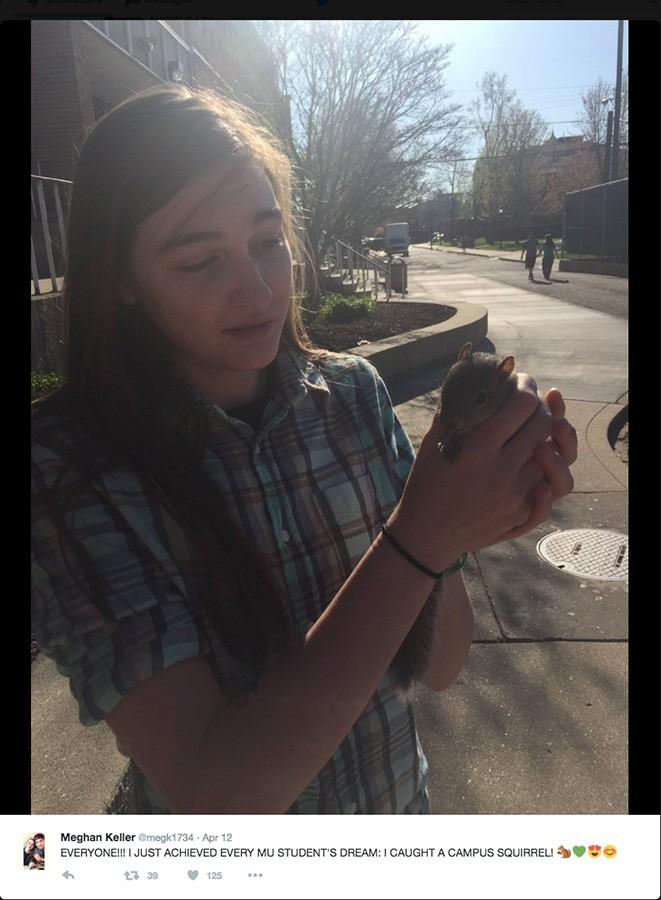 A freshman student achieved the Marshall University student dream of holding and becoming an alliance with one of the infamous campus’ squirrels.

Freshman health science major, Meghan Keller was the chosen student to reach this what once seemed to be an impossible dream.

“We saw the little squirrel sitting behind a bush by Towers West.  I stopped, pointed her out, and we both instantly had the same idea, to achieve the Marshall University dream and touch a campus squirrel,” Keller said.

Keller was with her best friend Evan Gregory at the time when she found the squirrel that they named Petunia.

To get Petunia’s attention, Even, Keller’s best friend who is a freshman biology major, teamed up to try and get their hands on her.

“Evan coaxed the squirrel over to my side of the bush where she got startled and hopped onto my hand.  Then she walked behind the bushes,” Keller said.

Once they got closer, they noticed that the animal had a slight injury.

“We could see her nose was bleeding and looked as if she was injured.  Evan got closer and closer until he basically just scooped her up in his hands,” Keller said.

Their interaction with the squirrel was positive and the animal was friendly.

“She didn’t scratch us or try to bite. She just sat in our hands even as we passed her off to one another.  I think because she was hurt she was seeking a sense of protection and liked hiding in our hands,” Keller said.

Though the animal was friendly, Keller said that it did seem panicky at first.

“She ran across Evan’s back and then jumped at me when I attempted to take a picture of her. But then she calmed down once she felt safe with us. It didn’t take long.  She let us pet her belly and everything,” Keller said.

The self-proclaimed MU Squirrel Wranglers didn’t feed the animal because they both felt overwhelmed by the fact they were holding a wild animal.

“I did want to take her to Towers for dinner with us,” Keller said.

Keller and Gregory wanted to keep Petunia, but felt that the residence halls were no place for a squirrel.

“Considering Petunia is an insanely cute, but wild animal, we were mildly concerned about diseases. But she didn’t bite or scratch us so that is reassuring.  We also went and thoroughly washed our hands immediately after we held her and such,” Keller said.

Gregory said that Petunia was a precious little squirrel and that he is thankful she bestowed the honor to hold her upon Meghan and himself.

The two plan on visiting Petunia as long as she allows them.

Desmond Groves can be contacted at [email protected]