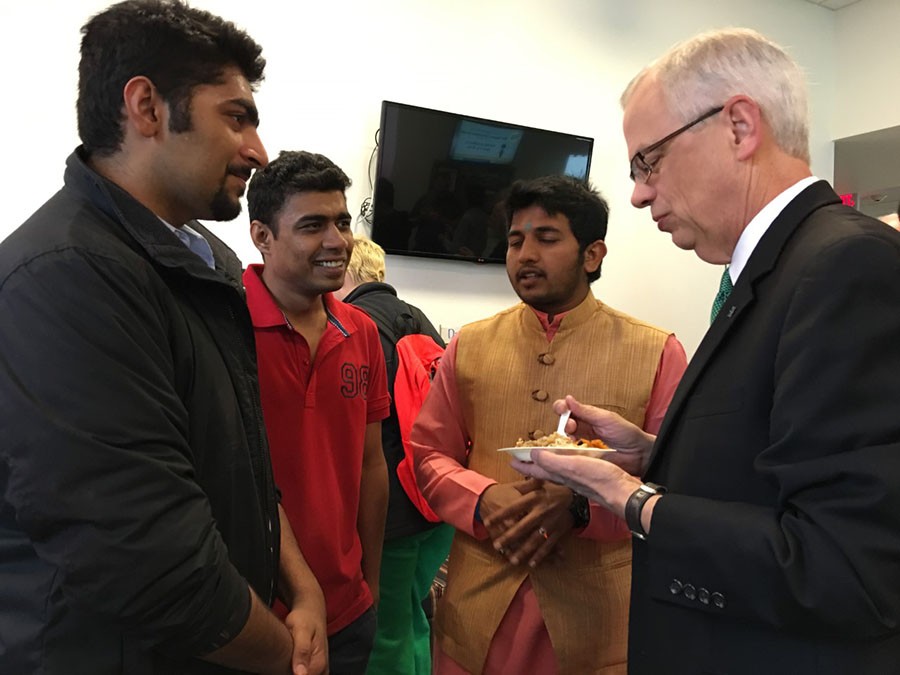 Marshall University President Gilbert enjoys an Indian cuisine while visiting the INTO: Marshall facility on Thursday for India Day.

The Indian Student Organization, in partnership with INTO, celebrated Holi Thursday on Marshall University’s campus.

“I’ve learned how enthusiastic the Indian students are here at Marshall, which is great,” Gilbert said. “I’ve been to India, so I already know some things about India. I’ve had the food. It’s a little different today, but I love Indian food. The color ceremony is an exciting and very interesting way to celebrate.”

Sophomore Vinay Raj said the event was much larger than expected and the Indian Student Organization was excited the event went so well.

“This has been more than expected,” Raj said. “We thought because of the rain and everything that it would be delayed, but we are very happy that everyone came out and have been able to experience each and every thing that we have had out today.”

Student engagement coordinator at INTO Kenneth Jones said this is always an exciting event to organize because of the meaning behind the celebration.

“We thought it would be a good idea for domestic students to participate [in Holi] and get this somewhat encompassing view of certain aspect of Indian culture,” Jones said.

The event included traditional Indian food and clothing, henna tattoos, information about Indian traditions and the Holi Celebration of Colors. ISO students also performed in flash mobs at the Memorial Student Center throughout the day including traditional music and dancing.

The Celebration of Colors included a period where only green was thrown to commemorate Marshall’s school color.

The celebration of colors stems from the Hindu legend about Holika, the demon who was said to not be able to burn but was destroyed by fire by the god Vishnu. The tradition of the throwing of colors comes from the spreading of these ashes after she was destroyed, according to Raj.

The Muslim Student Association also hosted its Politics and Popsicles event in partnership with the India Day celebration.

Politics and Popsicles allowed students to discuss fear of religious minorities, including Islamophobia and the current election while enjoying popsicles.

This was the second time Holi has been celebrated on Marshall’s campus.