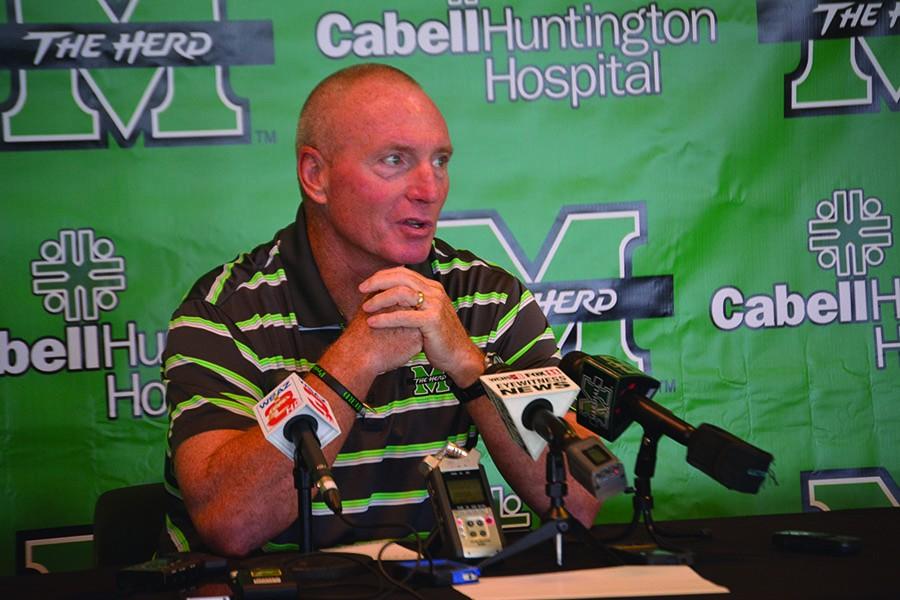 Marshall football head coach Doc Holliday speaks to the media during the 2015 season.

Marshall University head coach Doc Holliday held his annual press conference prior to the start of spring football this Monday at the Joan C. Edwards Stadium.

Despite seven starters gone from last year’s defense, including Conference-USA Defensive Player of the Year Evan McKelvey, Holliday said his team is prepared to pick up where it left off last season.

“It all starts with playing great defense,” Holliday said. “We’ve done that the last three years. We lost some really good defensive players. So, it’s important that our ends are back intact, our inside guys, we’ve got some good inside guys. There’s no question that expectations are extremely high. They should be; we expect to be great. We’ve got great players. We have to do a great job of developing them.”

Aside from its defense, the Herd lost several offensive players as well, such as running back Devon Johnson and wide receivers Deandre Reaves and Davonte Allen, who were seniors last season.

While the running back position has yet to be filled heading into spring ball, the Herd brings back receivers Deon-Tay McManus and Emmanuel Byrd, who combined for 548 yards receiving and 2 touchdowns.

Holliday said the starting quarterback was not set in stone heading into spring football, as well.

Junior quarterback Michael Birdsong suffered an injury against Purdue University in the home-opener last season and was replaced with freshman quarterback Chase Litton in the team’s second game.

Litton finished his first year under center by throwing for 2,605 yards and 23 touchdowns against 8 interceptions, leading the Herd to its third straight bowl victory.

“Well, the best players are going to play,” Holliday said. “You know, Birdsong had an unfortunate situation where he got hurt in that Purdue game and just never recovered enough to play, and Chase took advantage of the opportunity and did a tremendous job. So, we’re going to let them compete like we do at every position.”

While the skill positions are seemingly up-in-the-air, one position is not – the offensive line. Marshall returns seven players from last season’s line, all with game experience.

Senior offensive lineman Clint Van Horn, who missed majority of last season due to injury, was granted a medical redshirt by the NCAA, giving him a sixth year of eligibility. With both the return of Van Horn and the stability of the line, Holliday said he is confident that his line will return to last season’s form.

“The offensive line, with the return of Van Horn, is really back in tact,” the seventh year coach said. “It should be one of the strengths of our offense. This offensive line probably has more depth than any since I’ve been here.”

The Herd begin practices this week, going every Tuesday, Thursday and Saturday. Marshall students are able to attend the two scrimmages this offseason, scheduled for April 16 and 23, while the annual Green and White game is set for 3:30 p.m. April 30.