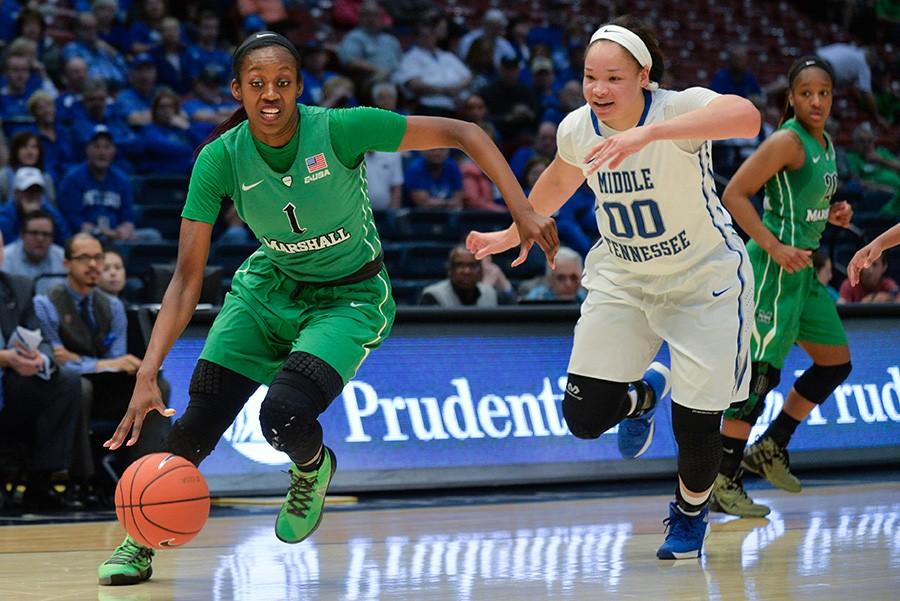 Marshall University women’s basketball will look to keep its season alive 7 p.m. Thursday when in heads to Athens, Ohio to face off against rival Ohio University in the NIT Tournament.

Marshall earned its NIT bid after winning a pair of games in the Conference USA Tournament against Florida International University and Western Kentucky University before bowing out in the tournament semifinals against eventual champion Middle Tennessee State University.

The NIT berth is just the third postseason birth all time for the women’s program. However, it’s the second straight under head coach Matt Daniel with the team participating in the Women’s Basketball Invitational last season where it defeated Northern Kentucky University before falling to Mercer University.

In the matchup with Ohio, seniors Norrisha Victrum and Leah Scott will be attempting to prolong their respective careers donning the Kelly green.

Scott has posted career-high averages in points at 16.3 per game and rebounds at 6.6 per game. Her season-long performance earned her a first-team All-Conference USA selection, adding to the second team selection she received last season. Scott is the first player in program history to be named to two all-conference teams for the Herd.

Victrum led the team in minutes, steals and assists this season, while also ranking third on the team in scoring at 9.1 PPG. Victrum may be a bit hobbled as she sprained her ankle in the team’s loss to Middle Tennessee State not more than a week ago. Victrum returned to the game after initially heading to the locker room.

While the Herd is led by its senior duo, Ohio played its way to a 16-2 conference mark and a Mid-American Conference regular season title on the strength of senior guard Kiyanna Black and junior wing Quiera Lampkins.

Black led the Bobcats in scoring with 18.1 PPG and was potent from beyond the arc, where she’s connected on 115 3-pointers over the course of the season. Black ranks second on the team in steals and third in assists as well.

Lampkins, who ranks second on the team with 14.5 points per game, takes more favorably to aggressively attacking the rim and getting to the foul line as opposed to launching from 3. Lampkins leads the team with 149 free throw attempts on the season, 62 more than the second-place Black.

Ohio’s matchup with the Herd won’t be the first time its tangled with an opponent from Conference USA this season as the Bobcats defeated Middle Tennessee State 72-49 Dec. 29 in Athens.

By comparison, the Herd went 0-3 against Middle Tennessee State this season, losing 65-54 Jan. 28 in Murfreesboro, Tennessee, 79-73 Feb. 27 in Huntington and the aforementioned loss Friday in the conference tournament.