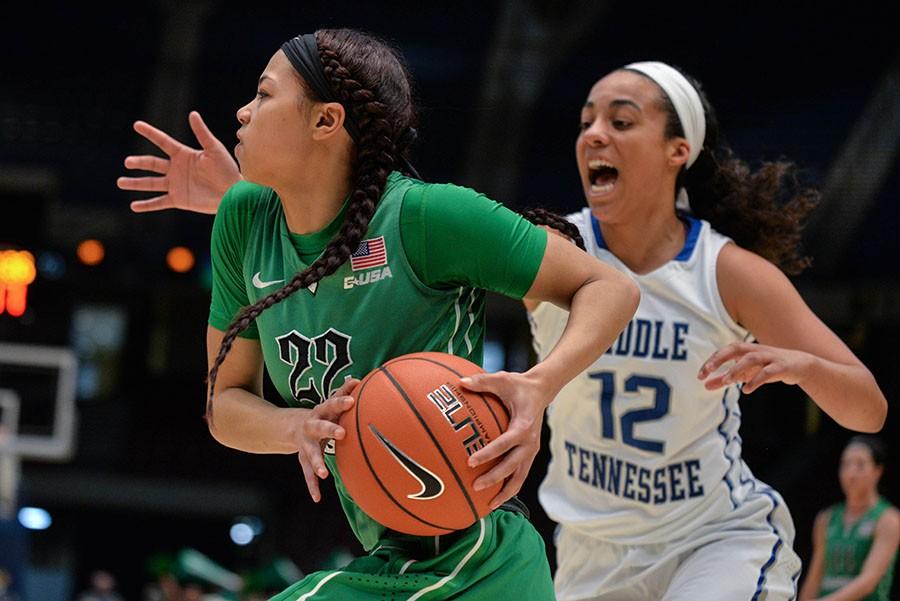 Marshall's Kiana Evans rushes toward the hoop for a two-point shot as the Herd takes on Middle Tennessee for the C-USA Women’s Basketball Semi Finals on Friday in Birmingham, AL.

Marshall faces Ohio University Thursday in the first round of the WNIT in Athens, Ohio.

Game time will be announced Tuesday.

“The ride that we’ve been on so far, hitting blackjack is all I could call it, winning 21 games for the first time in 30 years,” Daniel said. “I think we are going to have a shot to go win number 22. I think that our body of work speaks for itself when you talk about postseason play.”

First-round action of the tournament tips off Wednesday and concludes Friday.

Throughout Friday’s contest, the Herd’s offense struggled to create quality looks offensively, as its guards seemed to struggle with Middle Tennessee State’s defense sticking to its hip on every ill-fated drive attempt.

“We didn’t have it,” Daniel said. “We just didn’t have the magic. You could tell in the free shooting; it was just tough. You got to go to work on the bad days too.”

The Herd hung tough in the short term as it trailed 20-15 after the opening quarter, but the effectiveness of Middle Tennessee State’s defense and the Herd’s overall fatigue began to neuter its offensive performance thereafter.

The Herd battled to within 12 midway through the third quarter, but Middle Tennessee State proceeded to go on a 13-4 to close out the quarter and essentially, end the game as it entered the fourth quarter with a 55-34 lead.