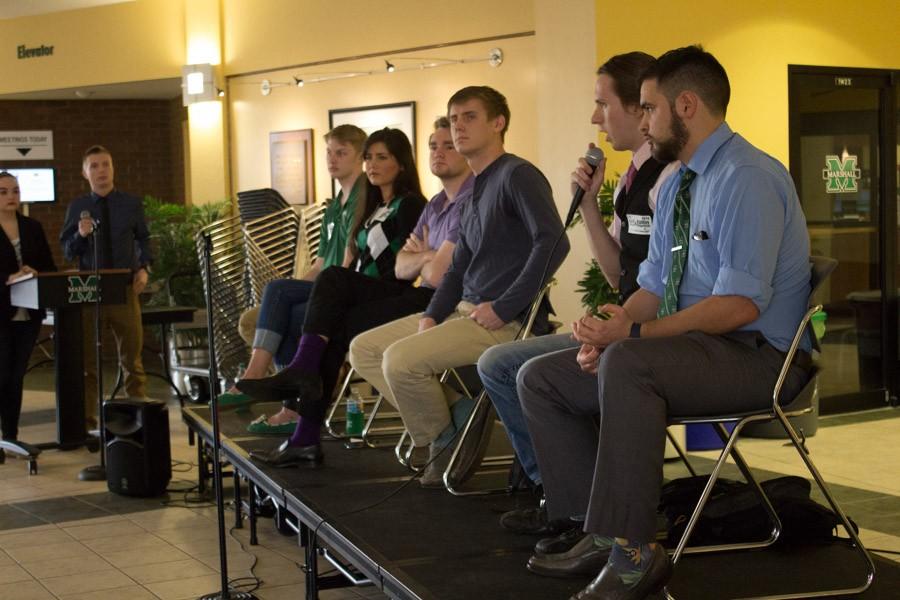 Presidential and Vice-Persidential Candidates answer media and audience posed questions at the SGA debate in the Memorial Student Center, March 14, 2016.

Candidates Matt Jarvis, Nate Miklas and Leif Olson are vying for the president position, while Emily Kinner, Amos Parlock and Collin Stipetich are competing as their potential vice presidents.

The debate was sponsored by The Parthenon and WMUL-FM. The first half was devoted to questions from the moderators, while the second half consisted of questions from students.

The candidates were given one minute for opening statements about their campaign platforms and then questions were directed at either every candidate or a specific presidential hopeful.

Jarvis said his campaign is focused on giving power back to the students.

“I think somewhere along the line something got lost where we weren’t allowed to express our opinions as students,” Jarvis said. “I’ve said it before and I’ll say it again, I find it hard to believe that a bunch of 60 and 70 year old men understand what we deal with on a daily basis.”

Miklas said his campaign is focused on community outreach to make Huntington and Marshall both more appealing.

Olson said his campaign is focused on improving student life and providing funding to student organizations.

“Over there we can see there are people having a bake sale to raise funding for their organization,” Olson said. “We can give it to them. We can give it to them from our collective tuition so we can make our lives more interesting and vibrant here at Marshall. Student life is important and it matters.”

In concern with budget cuts effecting the funding of student organizations, Jarvis said he wants to take this burden off of students so that their clubs can make changes on campus, Parlock said there’s not much the president or vice president can do about programs being cut and Olson said he plans to visit different organizations every day to educate them on how to get funding.

Jarvis and Stipetich agreed there are “unfortunate” divisions between SGA and the rest of the student body, but Miklas said he does not know where this idea stems from.

Kinner said her SGA experience has made her equipped to deal with vice presidential duties, but Miklas and Olson agreed an outsider can still bring in other leadership experience to handle the tasks of the presidency and vice presidency.

Jarvis said he wants to do more to help senators understand they are representing their constituents and not their own interests. Olson said that he would have this talk with senators as well if elected, but Parlock said these issues could’ve already been addressed by “insiders.”

Olson raised an issue with the fact not enough people run for SGA positions and said he would like to require senators to actively campaign for their positions. Jarvis said he encourages senators to speak to their constituents, but they cannot be required to go out and campaign.

In regard to their goals if elected as vice president, Stipetich said he wants to try to return the old library hours and “foster a better relationship between Greeks and the rest of the student body.” Parlock said he would like to contact “average students” more and work to get a seasonal ice cream stand and Kinner said she would like to turn the top floor of Smith into a café.

Jarvis addressed LGBT rights, saying he wants to extend unisex bathrooms across campus rather than having them only be found in the library. Jarvis said he wants to bring LGBT students “out of the closet and the basement,” to which Olson agreed. Parlock said he would help the LGBT Office by not shutting it down.

Candidates were each given one minute for closing remarks.

“We [Olson and Stipetich] are not here to attack SGA,” Stipetich said. Some have been concerned about their stance because of Olson’s remarks to SGA after the failed RFRA resolution.

“Don’t just vote for who you know,” Miklas said in concern to comments about the presidency being a “popularity contest.”

“Vote for the change you want to see at this university,” Jarvis said. Students have voiced concerns over what exactly is within the student body president’s power to obtain.

Voting for student body president and vice president will take place Tuesday and Wednesday in the Memorial Student Center.