Students learn about Catholic priest through question based event 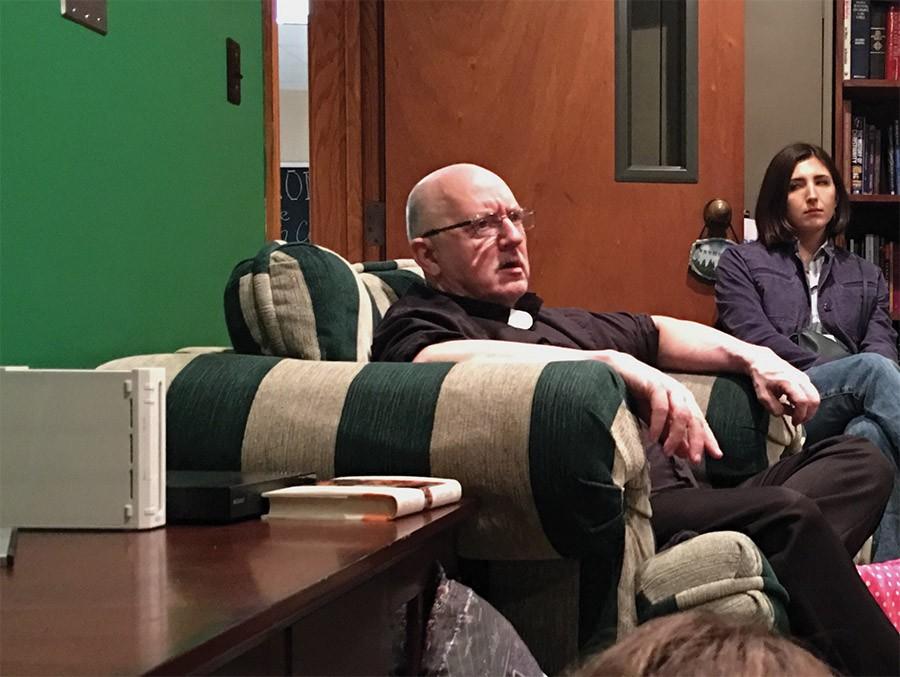 “Ask Father Dean” is an event that takes place at least once a semester in the Catholic Newman Center.

Questions were submitted throughout the semester by students in group conversations or by adding them to the bowl in the Catholic Center.

Dean said his decision to be a priest wasn’t about power. Dean emphasized that it was more about believing that it was something he could do.

“Things happen in our life that we don’t understand the pattern,” Dean said. “Things build on other things. There is just something about all things religious that always intrigued me. I knew the seminary was something I could do.”

Dean said he was inspired by his parents because they allowed him to select his own path in life.

“My parents took a hands-off approach,” Dean said. “They didn’t want anyone to think that they had forced me into the seminary. He [Dean’s father] thought he saw something in me that could be useful as a priest.”

Dean addressed the way that those in the Catholic faith view the book of Revelations. Dean said the book is meant to instill more hope than fear because of its beautiful message.

“God is always in control,” Dean said. “It’s never this happens and then this happens, it’s always things working together to lead up to the victory of God. That’s the beauty of Revelations. One of the first things he says is ‘don’t be afraid.’”

Dean spoke on the Catholic Church’s stance on sexuality.

“Our vision is that the purpose of sexuality is the union of man and wife, with the purpose of hopefully being fruitful,” Dean said. “God has a purpose. There is no degrading of any person; there is no negation of any person. It’s not just about ‘having sex,’ it’s about how you’re going to be for others and your purpose in the world.”

Campus minister Traci Ferguson agreed with Father Dean, saying people should not limit their definition to their sexuality alone.

“Whether it’s homosexuality or heterosexuality, we live in a culture that leads with sexuality,” Ferguson said. “Everyone is at that age where they’re ‘finding themselves,’ but the only place that they’re looking is in sexuality. I think we are in this culture where you have to define yourself immediately out of the gate and that’s the thing they start with. Perhaps leading with our humanity would be the best thing for everyone to really know us.”

Dean advised students to always be open to God’s calling in their lives.

“I’m not unique on thinking this, but I think God leads us to what we’re meant to do,” Dean said. “The things the world needs, the things we need, God always brings those together. God calls you to something. Remember that He never calls you to mediocrity. It may not make sense now, but trust him on this. He takes you where you’re meant to go.”