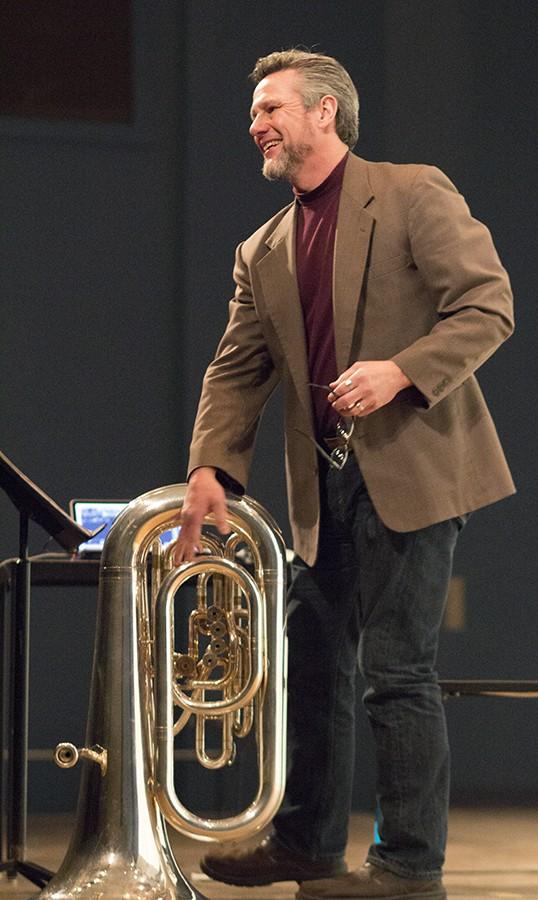 “He’s a very activist performer,” said Marshall tuba professor George Palton. “He’s been a guest here on several occasions during my tenure and is certainly a friend of the studio.”

The concert was filled with unaccompanied pieces for tuba.

“For 10 or so years I have liked to put together recitals of all unaccompanied tuba pieces; there are a lot of them out there,” Zilincik said.

The music that filled Smith Music Hall ranged from cartoon and stylistically dance-like to ambient pieces.

“The thing I was trying with this recital is old and new,” Zilincik said. “Blends of old and new, old old, new new and brand new new work.”

The recital included some of Zilincik’s own compositions.

Zilincik is on sabbatical this semester, which has given him time to write and practice his tuba pieces.

Zilincik said he does not recommend sabbaticals to everyone and credits the downfalls of the vacation to his song “Doldrums.”

“Every day of going to university, meeting all of my students, seeing people every day, is very energizing, that social energy is fantastic,” Zilincik said. “I am a totally social person so waking up every day, having breakfast, getting my kids off to school, then going in my basement for eight hours I’m starting to tear my hair apart so I got stuck in the doldrums.”

Zilincik also said sabbaticals have their up sides.

“It is fantastic that I practice a lot and write a lot of music,” Zilincik said.

This vacation from being a professor provoked an intrinsic ambient piece in “Doldrums.”

“It is based on that idea of it being winter, being kind of on the low side of things, so it’s got that very very relaxed kind of idea,” Zilincik said.

The show closed with a standing ovation. Marshall professors said they are hoping to invite Zilincik back to Huntington soon.

The next solo recital is Solen Dikener’s faculty recital on March 6 at 4 p.m. in Jomie Jazz Forum 103.

Leah cook can be contacted at [email protected]