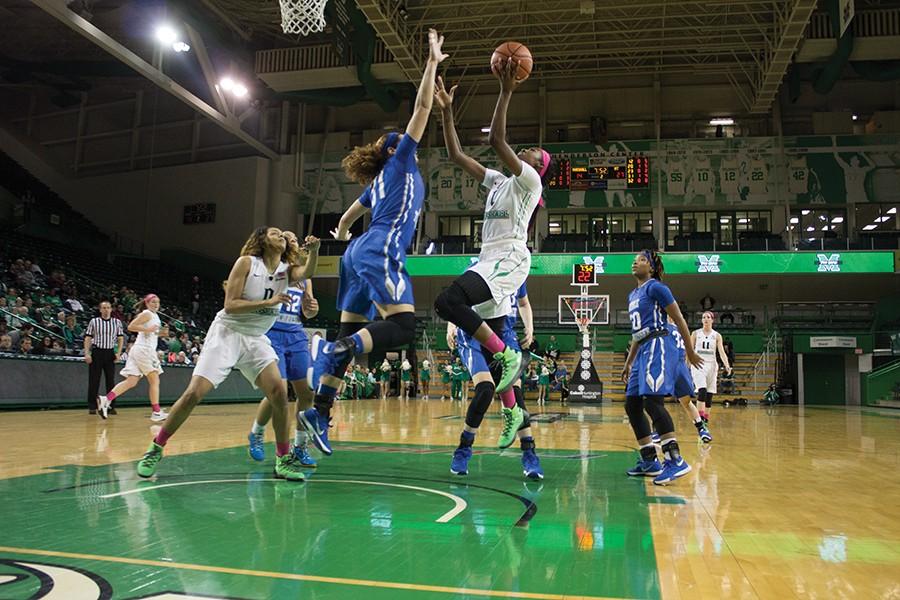 Before the game, seniors Leah Scott and Norrisha Victrum were honored on the court of the Cam Henderson Center.

The action started fast with both teams scoring efficiently in the opening minutes.

However, once Middle Tennessee’s Brea Edwards converted a layup midway through the first quarter to give the Blue Raiders a 10-9 lead, the Herd could not respond.

The Blue Raiders went on an 8-0 run following the score before the Herd slightly cut the lead to seven by the end of the first quarter.

Middle Tennessee State pushed the lead to double-digits in the second quarter after a 3-pointer from junior Ty Petty, which gave the Blue Raiders a 10-point lead.

Edwards, who finished with 16 points, then hit one of her two 3-point baskets to make it a 13-point lead.

The Herd had no answer for the Blue Raider’s defense, which forced five Marshall turnovers in the second period.

The lead grew to as much as 15 late in the second quarter, and Middle Tennessee State took a 41-27 lead into halftime.

After Middle Tennessee State’s Alex Johnson buried a jumper early in the third quarter to push the lead to 16, the largest lead of the game, Marshall’s Kiana Evans answered back with a 3-pointer to cut the lead to 13.

From there, Marshall slowly whittled away at the lead throughout the quarter, getting as close as five points after Victrum hit a layup with 2:57 left in the period.

The Blue Raiders, however, finished the quarter on a run and took a nine-point lead into the final quarter.

The Herd got as close as four points in the fourth quarter.

However, with 3:14 remaining, Middle Tennessee State’s lead went back to 12 after Marshall’s offense had trouble getting a basket.

The Herd closed the gap again and a late 3-pointer from freshman Shayna Gore had the team down by five, but Middle Tennessee State hit its final five attempts from the charity stripe to close out the game.

The Blue Raiders improved to 19-8, including 13-3 in conference play.

“I thought we played competitively, especially in the second half,” Daniel said. “We were a little slow to start the game, but we played better as the game went on.”

With no home games remaining on its schedule, the Herd hits the road for its final two games of the regular season.