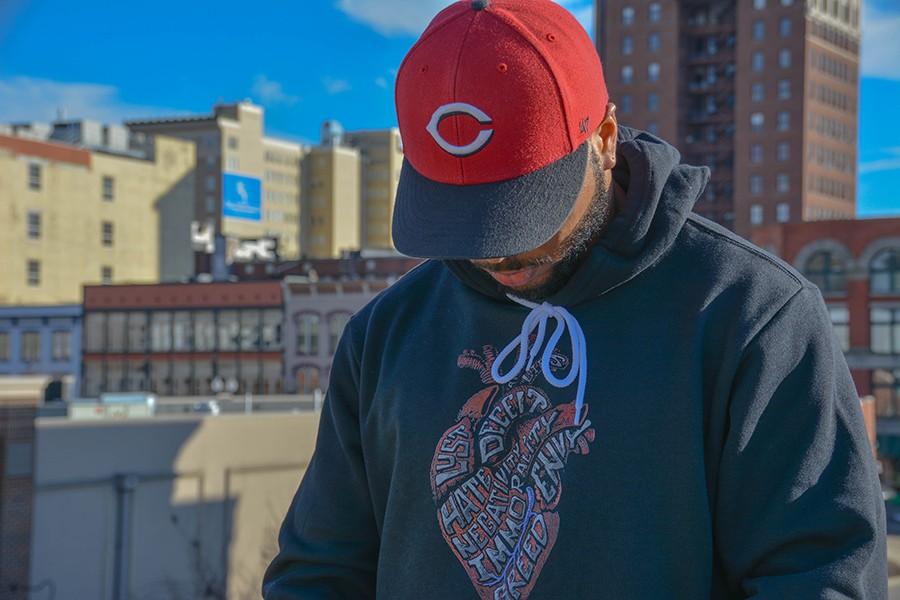 Nigel Wallace wearing one of the designs from his clothing line Divine Purpose.

Wallace said he wanted the name of his line to reflect an individual’s mission in Christ on Earth, so he chose “Divine Purpose.”

“Our mission as Christians isn’t really world-focused,” Wallace said. “We’re here for a specific purpose I believe, so it was just different. When you get to thinking about it, we’re here for a divine purpose, we’re here to live for God, so that’s how the name came about, and that’s the approach that I took with it.”

Wallace said he spent many hours considering what to put into his first shirt design. He said he wanted his clothing to embody what it feels like to be a Christian.

“I was thinking, ‘How can I properly symbolize what it means to be saved or what being saved means to me, and embody that in one design?’” Wallace said. “I tried to put a lot of thought into it, so I think it paid off and a lot of people got the message and have gravitated toward the design.”

Wallace may only be a senior, but he has decided not to let his dreams wait until he obtains a degree.

Wallace said he decided to stop waiting to make things happen for himself when he realized he wasn’t happy with the job he was working.

“Why wait?” Wallace said. “That’s the question I ask myself. The more that you do today, the less that you have to wait. I just knew that my life had more meaning, and I knew that my mission was more meaningful than working a job that wasn’t really doing a lot for me, and I just put the pieces together.”

Wallace said he was raised in church, but his faith deepened after coming to college.

“Realistically, I didn’t really come to discovering my own walk until I was about 19,” Wallace said. “I met with a guy on campus and he just sat down and showed me this book… and he put a lot of things in perspective for me. I started to read the word and I started to pray and fast, and it hit me that I needed to make sure I was really saved.”

Wallace said he wants his clothing to give people the ability to express their faith in a way that can be comfortable for everyone.

“Everybody witnesses in a different way,” Wallace said. “Some people by actions, some people by words. I created the clothing because I knew that it would be a nonverbal expression. I knew that people would be able to physically express through designs and what they wore.”

Wallace said he hopes his business continues to grow in the future.