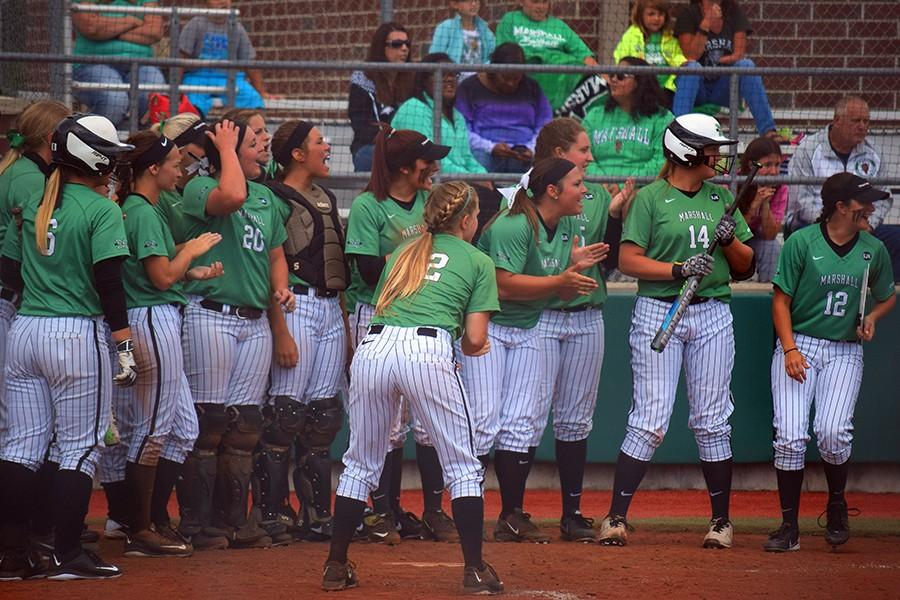 The Marshall softball team celebrates a home run during the 2015 fall ball season.

The Marshall University softball team heads to Tuscaloosa, Alabama Friday for the Bama Bash tournament, which will span the entire weekend.

The tournament will present multiple games against Power Five conference schools for the Herd, presenting a challenge not yet seen in its 6-1 start to the season.

However, after going 4-1 in the Florida Gulf Coast Tournament last weekend, including wins in the last three contests, members of the team said they are confident in the team’s ability to come away with victories in each game of the tournament.

“I’m confident about our upcoming games because of the win streak and the way we practice,” senior outfielder Kaelynn Greene said, “and because how I know the team can play.”

“We know we are going to face upper level competition this weekend,” senior infielder Alyssa Woodrum said. “And we know that we can compete and win these games, and that is helping us prepare for these games.”

The confidence from Woodrum and her teammates stems from the team’s hot start to the season, which she says is due to consistent effort game to game.

“I think we have played really well,” Woodrum said. “Obviously we are six and one, and I feel like we are playing hard from start to finish.”

Although the team has performed well early on this season, Greene said she thinks the team has a long way to go before it reaches its top form.

“We have played well, but we have a lot more to show as a team,” Greene said.

Following the Alabama Bash, Marshall will go to North Carolina to play in the Campbell University Tournament March 4-6.