End it Day takes a stand on human trafficking 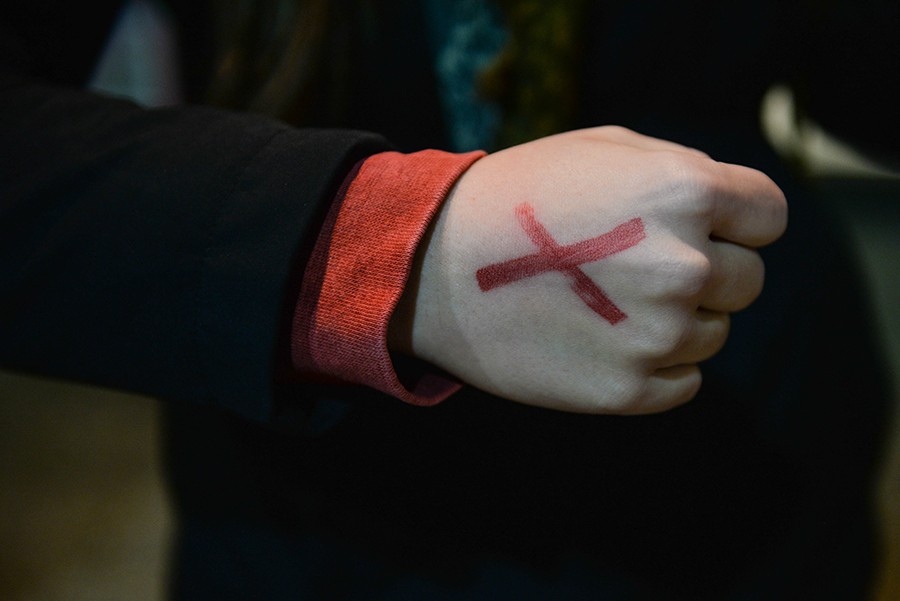 Marshall University students take turns standing outside the Memorial Student Center and sport red “Xs” on their hands in an effort to bring awareness to slavery and human trafficking on Thursday. The representatives spent a total of 27 hours to represent the 27 million currently enslaved.

Various religious clubs on Marshall University’s campus got involved in the End it Movement Thursday morning.

Students will stand in shifts on the Student Center Plaza for 27 hours straight, beginning 8 a.m. Thursday. The hours are meant to represent every million people enslaved around the world.

“End it Day is the day established for awareness to be given to the 27 million people who are still trapped in slavery, whether that be sex trafficking or work without pay, anything like that,” Mullins said. “That day has kind of been given as the primary use for raising awareness of this issue.”

Students from BCM, YoungLife, CRU, UKirk and UMS all volunteered to sit in shifts to answer questions from students.

Mullins said he was inspired to organize this event at Marshall after attending a conference and hearing stories about people who were saved by the organizations partnered with the End It Movement.

“I’ve known about the End It Movement for a long time just through church stuff,” Mullins said. “This past year I went to Passion 2016 conference, where there are well-known gospel speakers and one of the speakers told a story about a girl who was rescued from sex slave trade. Just that story really moved me and just that whole weekend working up to raising awareness to the world.”

Sophomore statistics and creative writing double major David Hannan said this movement is important to him because of his faith.

“The End It Movement is important to those of us who plan to continue sitting in the cold because we believe in a God who is just and there’s an injustice in the world that we want to shine light on,” Hannan said. “We want to make people aware of it so that we can change it. The ultimate mission is to get money to organizations that help get men and women out of sex trafficking across the world.”

Junior nursing major Andrew Ely said raising awareness of this issue can prompt people to donate to the cause in order to help those who are trapped in any form of slavery.

“We’ve heard missionaries talk before about how easy it would be to rid this with what is considered a small amount of funds,” Ely said. “Typically, Americans spend more on pet costumes than they do helping people that need what we consider to be the most important thing: the gospel.”

Ely said this awareness is also important because slavery is very much a wide-spread issue across the globe.

“Even beyond a religious perspective, obviously that’s our motivation, but trying to get these people to understand that there’s still terrible things happening in the world of slavery,” Ely said. “We may have abolished it here, but slavery has taken on a new face. It is alive and well in the world and it’s terrifying.”

Hannan said Christians as a whole are hoping God’s light can shine through this dark and terrible situation.

“A big reason why BCM and Christians want to support the End It Movement is because we believe that Jesus has set us free and so we want to be about freedom in the world,” Hannan said. “There are people who aren’t free, so we hope to shine light on that and be able to share a love of God through that.”