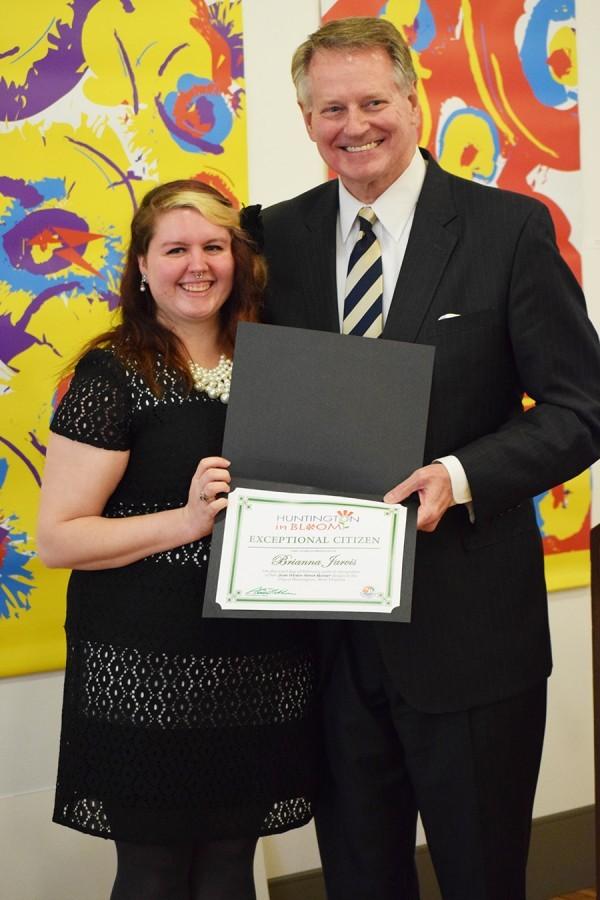 Huntington will soon see a splash of color on flag poles throughout downtown thanks to Marshall graphic design student Brianna Jarvis.

Jarvis is from Princeton, West Virginia and came to Marshall with a Completion Certificate in graphic design from Mercer County Technical Education Center.

There she competed in SkillsUSA where she won the state competition and finished 17th in the nation.

After graduation, Jarvis was ready for a challenge, and her dream of coming to Marshall has proven to be just what she envisioned.

“I think coming to Marshall has definitely given me more opportunities,” Jarvis said.  “By the time I graduated high school I felt like I was a big fish in a little pond in the graphic design world, and coming here I needed the shock factor. I needed to work myself back up.”

She chose graphic design due to its ability to allow her to be an artist in modern society and in a practical way.

“I absolutely love it. It’s great because I can do graphic art, and then there’s graphic design.  I want to do more corporate graphic design in my career,” Jarvis said.

Her time at Marshall has been filled with success and can be seen in her bison sculpture, “Nexus,” at Pullman Square and Artisan’s Express Train located by City Hall.

This competition, sponsored by the city, challenged local artists to design a set of four banners to be hung down third and fourth avenues.

“I created images of the Visual Arts Center, the fountain and Marquee at Pullman, Huntington Court House, and Keith Albee,” Jarvis explained.  “I chose those four images because the banners will go up in that area of things downtown.”

Based off of existing photos, the images were created using eight vibrant colors and geometric shapes in Adobe Illustrator.

By using fewer colors, Jarvis knew her banners would be more cost efficient for the city.

“These colors will show up in the snow but not deter drivers, and they are basically simple symbolism,” Jarvis said.  “I chose fewer colors because I know it costs more to print more colors and I didn’t know if they were doing full color or pantone so I just kept it to just a few colors with that in mind.”

Jarvis’ enthusiasm and work ethic have not gone unnoticed by her professors at Marshall.

“Ever since Brianna threw her entire focus into Nexus the Buffalo in Pullman Square, she has been a whirling dervish of creativity,” said Mary Grassell, professor of graphic design.  “There are times when us faculty have to say ‘slow down’. Her energy is boundless.”

Her artistic talents are just as evident in the new downtown banners.

“The Winter Banners for the city are, I believe, her best work.  They are vibrant and well designed, and should brighten the city in these dreary days,” Grassell said.

“I’ve done football since finals week last spring, and I’ve done basketball since the first or second week of fall and I just love it,” Jarvis said.

She works in the recruiting department of the football program, which includes creating ads and custom flyers for players.

“I do things like taking one of their game photos and putting them in a Marshall jersey, it’s pretty neat and I get to be creative,” Jarvis said.

The women’s basketball team utilizes Jarvis’ artistic abilities to create an array of graphics including everything from Twitter graphics for birthday shout-outs to holiday flyers.

“Doing stuff for the current basketball team is more intimate because I really get to know all the girls on the team. It’s a lot of fun,” Jarvis said.

Her new found love of working with these teams has had an impact on Jarvis’s plans after graduation in Spring 2017.

“Since I’ve been working with athletics a lot I really want to try for an ESPN internship this summer,” Jarvis said.  “Since high school I’ve said I want to be a graphic designer for Disney, but ESPN is owned by Disney, so I think I’d be okay with that.”

Her next competitive endeavor is the Little Orphan Annie Comic Strip Contest.

The top 10 contestants get two free tickets to see Annie Wednesday at Keith Albee Performing Arts Center and the winner will receive $100 and a banner on MyMu.

Jarvis has left her artistic mark on Huntington and hopes to further her education in New York after working in the field for a few years.