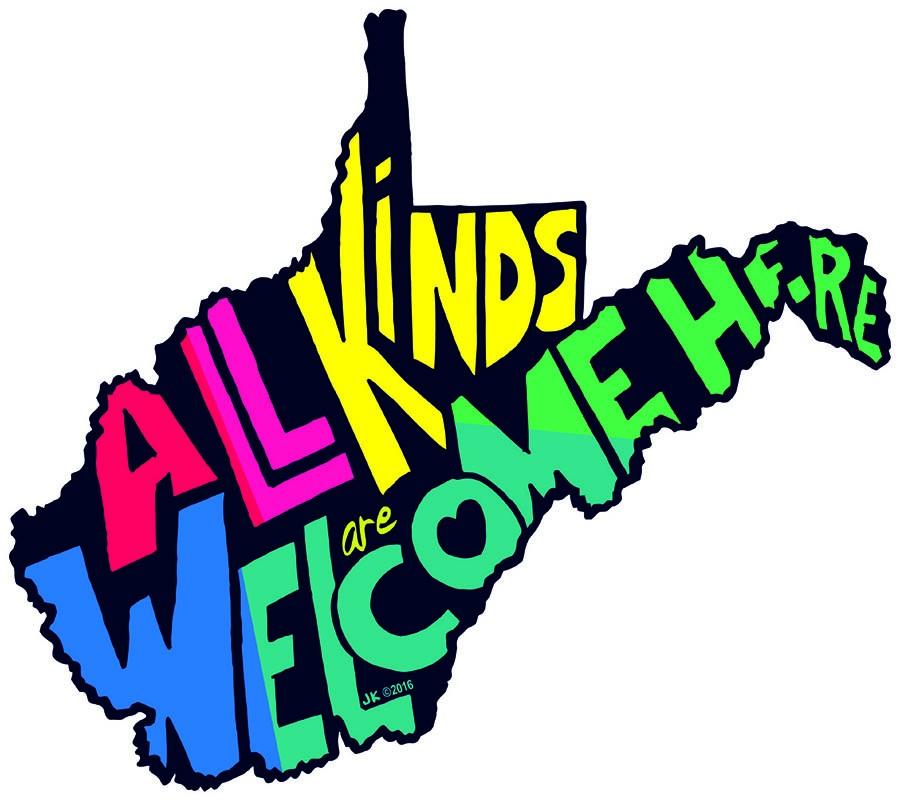 These are being posted throughout Charleston business windows created by Jessica Kennedy .

The West Virginia House of Delegates passed HB 4012, the “West Virginia Religious Freedom Restoration Act,” Friday.
HB 4012 would allow discrimination against LGBT people and any person who does not fit into a person’s religious beliefs. The bill is going to send the message that the state of West Virginia is not open to all. Also, it would somewhat reinforce the stereotypes that people all over the country have about the Mountain State.
Those in favor of the bill have argued that it is our Constitutional right to have a free expression of religion and that this bill will just be a reaffirmation of that fact.
However, local businesses in Charleston have decided to show their opposition to the bill by posting stickers in their windows. The stickers display the state with the phrase “All Kinds are Welcome Here” and were designed by Jessica Kennedy.
Paul Greco, owner of Sam’s Uptown Café and the Boulevard Tavern in Charleston posted on his businesses Facebook page Friday his reasoning behind using the stickers.
“Sam’s and the Tavern are, have always been and will always continue to be safe places for folks of all genders, races, creeds, colors, religions and sexual orientation,” the post read. “We welcome your business and promise to only judge you by the music you play on the jukebox.”
Local businesses are aiming to have their political voices heard in order to try to persuade the government to realize the consequences that could come with passing this bill.
Many argued there would be no negative impact to the economy. However, after Indiana passed a RFRA last year, the city of Indianapolis alone reported a loss of $60 million in a single year. That is a good indication of what could happen if this bill were to pass in West Virginia.
West Virginia simply cannot afford to pass the RFRA. A sudden need to boost the economy and create jobs has been a burden on our state recently and a move toward discriminations could be bad for business.
The Religious Freedom Restoration Act is now in the Senate where it may be voted on later this week.