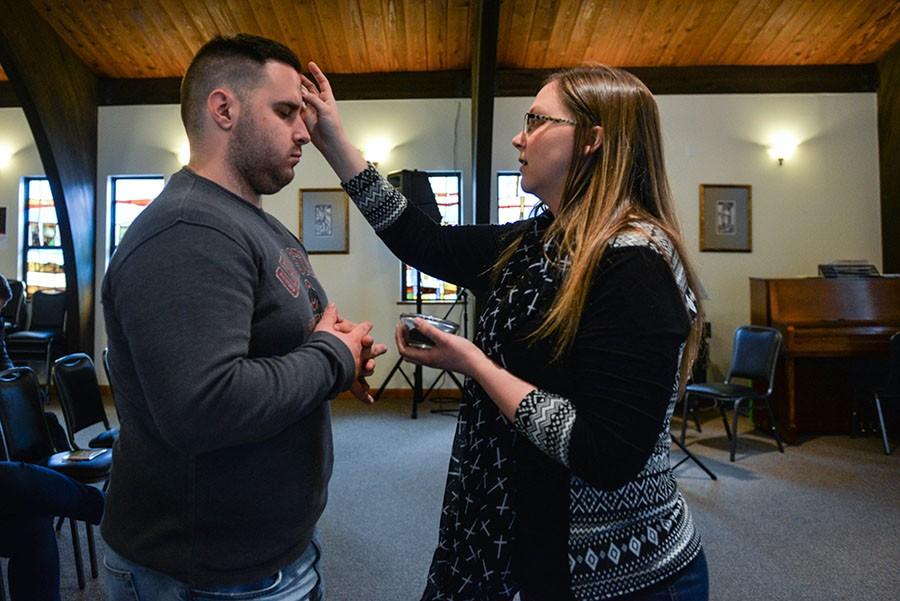 Ash Wednesday marks the beginning of the season of Lent.

This year, students on Marshall’s campus could receive ashes in two places.

Campus ministers Ellen Dawson, of UKirk, and Benjamin Wells, of UMS, held Ashes to Go at the fountain outside of the Student Center Wednesday morning.

Ashes to Go is a national campaign to bring the holy practice of the distribution of ashes at the beginning of Lent to the streets. The idea is to keep the need, humility and healing of the Lord from being confined into a church building.

Dawson said she and Wells decided to participate in Ashes to Go so students rushing to class would still have access to this practice.

“We wanted to make Ash Wednesday accessible for people that might not be able to make it to their church or their mass to receive ashes,” Dawson said.

Wells said the distribution of the ashes is a “very old practice in the Christian church” to start the Lent season.

The ashes applied on the forehead are a symbol of penance, mourning and mortality. Dawson said these things are critical for a Christian to remember not only in the days leading up to Easter, but all year long.

“When we place the ashes on your forehead we say the traditional words, ‘Remember that you are dust, and to dust you shall return,’” Dawson said. “It’s just a beautiful expression of what we believe as Christians, that we were formed out of the dust and that, even when we return to the dust, we are souls redeemed.”

The distribution of ashes was also held at the Newman Catholic Center on Wednesday afternoon.

This service included prayer for strength and guidance for students sacrificing something for Lent, as well as the application of ashes to the forehead.

Senior biology major Giannna Covelli said that growing up Catholic has instilled the importance of observing Ash Wednesday into her life because she feels it’s important to follow Jesus’s example.

“I’ve always grown up Catholic, so it’s kind of been instilled in me and I think it’s important because Jesus spent the 40 days in the dessert, so we’re kind of emulating him,” Covelli said.

Senior communication disorders major Kelsey Higgins said she feels Ash Wednesday and Lent are important for taking a step back to see what is right for your life rather than doing “worldly” things.

“I think Ash Wednesday really helps you get in the mindset for the rest of Lent,” Higgins said. “It’s just really good to spend 40 days trying to bring yourself back from everything else that the world tells you is right, and to figure out what’s actually right for you.”