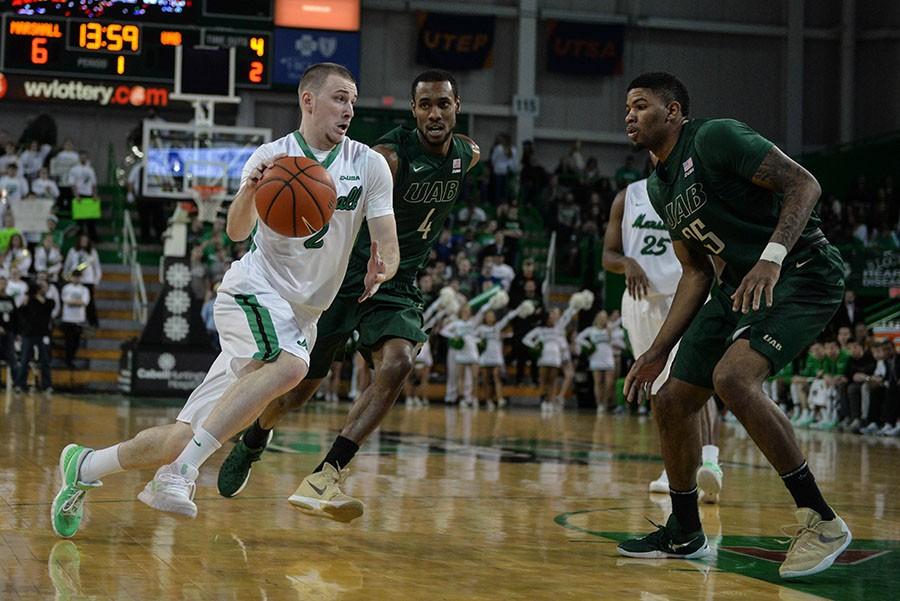 Guard Stevie Browning drives past a defender against the University of Alabama at Birmingham Jan. 30.

The Marshall University men’s basketball forward duo of James Kelly and Ryan Taylor have captured the majority of the headlines this season, but,there are other significant contributors on the team than  those two players.

The starting guard combination of Jon Elmore and Stevie Browning has made an impact, despite both players being in their first season with the program. Elmore is a sophomore transfer from the Virginia Military Institute, while Browning joined the program after playing his first two seasons of eligibility at Fairmont State University.

Both players have been integrated into the Herd starting lineup where their production has heightened as the season has progressed.

Elmore has taken on the responsibility of being the team’s primary ball handler; a role he thinks suits him well.

“I think my ability to make plays and make the guys around me better has helped out the team a lot,” Elmore said.

Elmore’s skillset has manifested in the box score as he leads the team with 5.5 assists per game on the season. In fact, since the start of conference play, Elmore ranks first in the entire conference with an average of 6.5 APG.

However, Elmore has also showcased the scoring acumen he displayed so often during his high school career, where he averaged 31.4 points per game as a senior. He ranks third on the Herd in scoring at 14.4 PPG with his ability to knock down the long ball being the primary catalyst.

Elmore is second on the team with 44 made 3-pointers for the season, but just as the case with his passing, no player has outdone Elmore’s output in conference play, where he has hit a conference-leading 39 treys.

Elmore totaled a team-high 23 points in the Herd’s latest game, a 109-91 win against the University of Texas at San Antonio. He stayed true to form, hitting seven 3s to account for 21 of his 23 points.

Browning, meanwhile, has accepted whatever assignment the coaches ask of him, showcasing his versatility as a player and his commitment to the team.

“I do whatever it takes to help the team,” Browning said.

Browning is fourth on the team in scoring, second in assists, third in rebounding and tied for second in steals. Throughout the season, Browning has split his time in the starting lineup as the team’s point and an off-ball guard.

With Elmore taking the reins of point guard, Browning has transitioned to playing more without the ball, where his cutting has resulted in several high-flying alley oops on backdoor cuts to the basket.

Elmore and Browning, however, both have a better chance to provide for the team every night with Taylor and Kelly forcing opposing defenses to key on them for the entire game.

“They open up everything for us because the defense sucks into them and it makes things open for other players,” Browning said.

Neither Elmore nor Browning envisioned such immediate success when they joined the program.

“First year players don’t usually have that big of an impact,” Elmore said. “God has definitely blessed me,” Browning said. “It is something I didn’t expect.”

Browning and Elmore will attempt to continue to make their marks on the program 8 p.m. Saturday when the Herd (12-12, 8-3) travel to Bowling Green, Kentucky to take on Western Kentucky University.