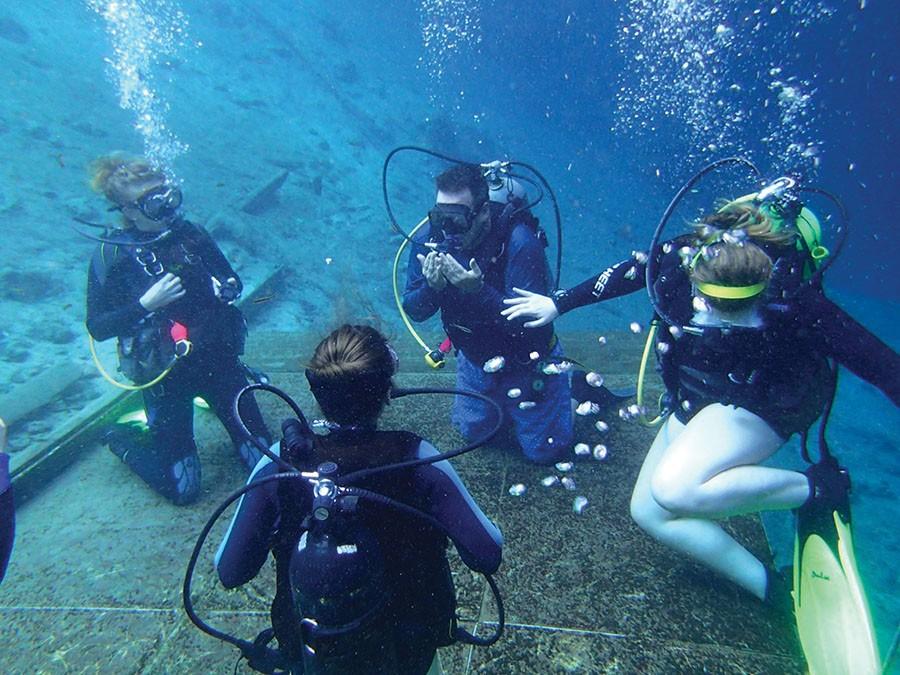 Members of the Marshall University scuba club dive in Florida during winter break.

Deep under the Florida waters, Marshall University students had the opportunity to dive and study different aspects of environmental science as well as swim with the manatees.

The Marshall University Scuba Club took one of their annual trips to Florida over winter break, diving under water, while many other students were home dealing with the cold weather.

Alyssa Brady, MU Scuba Club president, said she enjoys diving and has become accustomed to the technicalities of breathing and functioning underwater.

“It’s definitely something that I am hooked on,” Brady said.

Brady said while underwater, everything looks different, sounds different and even your senses are attuned to something different.

The Scuba Club “officially” started a little over six years ago now has approximately 60 members with an assortment of majors.

Colby, who has only been diving for a semester now, said it has changed her entire perspective.

Students who usually become familiar with the scuba team start in one of Dr. Thomas Jones’ environmental science courses.

Jones said the Scuba Club gives students a learning experience different than the typical textbook and notebook paper experiences they are used to.

Jones said the Scuba Club has allowed students to disregard worries and realize they can do what they set out to accomplish.

“Face fears, work your way through fears and at the end you realize that you can do something,” Jones said.

During the most recent scuba trip, seven students explored the deep waters, researching manatees and other endangered species.

Two members also became certified scuba divers, allowing them to dive on their own without an instructor being present.

One  of  Jones’ environmental science classes, tropical ecology, will be traveling with the Scuba Club on a nine-day scuba trip to Bonaire in June.

The Scuba Club will return to Florida to visit Key Largo over spring break.

Darius Booker can be contacted at [email protected]