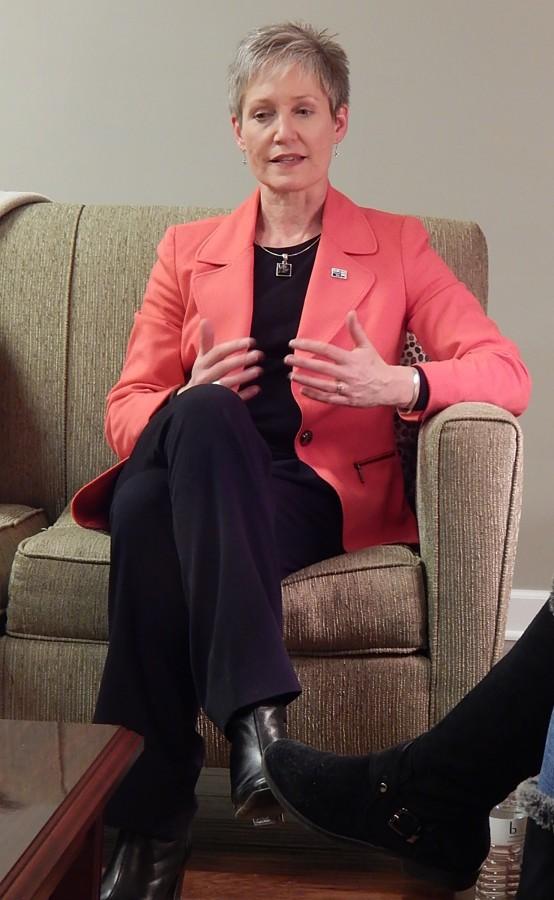 Laura Gilliam, Executive Director of the United Way of the River Cities, discussed her work and faith with UKirk students.

UKirk students heard about the importance of the United Way in the Huntington community Tuesday night.

Laura Gilliam, executive director of United Way of the River Cities, discussed her journey to where she is today, both in her job and in her faith. Gilliam said she wanted to find a place where she could combine her faith and a career.

Gilliam said it was an adventure finding where exactly she fit in. Gilliam said she first found that place with the nonprofit organization, Faith in Action.

Gilliam said her nine years with Faith in Action were an excellent learning experience because she encountered people from many different cultures and walks of life.

“We had volunteers who came from pretty much any denomination, from the Jewish community, from the Muslim community, from the Hindu community,” Gilliam said. “We had some with no particular faith who just wanted to help people. One of the things that gave me the chance to do while I was working with them was to learn so much about other faiths across the world.”

Gilliam has now worked for the United Way of the River Cities for 10 years. Gilliam said she joined them at an interesting point of rebuilding for the organization.

“It was an interesting time to go into that organization because they were going through a real shift in philosophy and how they do their work and how they responded to the community,” Gilliam said. “So even though the organization has been around since 1922, I was entering it at a time where it was sort of rebuilding and reimagining itself.”

Gilliam said despite the fact United Way is a national organization, each branch handles problems in their community differently.

Gilliam said although her job can be challenging, she has a strong respect for the organizations United Way raises money for.

“It’s hard, it’s not easy,” Gilliam said. “I’m amazed at the work that our funded partners are doing because they’re in the trenches. Some of the stuff that these folks do, I just can’t imagine doing. We are blessed to have all of that, because we live in an area where there are a lot of services.”

Senior biology and psychology double major Allyson Bias said it was interesting to learn about all the different things United Way does in the Huntington community and worldwide.

“I actually didn’t know that they [United Way] raised money through businesses and everything,” Bias said. “I thought it was really interesting when she went into how they’ve recreated it to tackle where the issues are coming from, like high school dropouts, but they’re also putting in programs for the people suffering from substance abuse or who are homeless.”

Freshman psychology major Emily Underwood said despite the fact she has known Gilliam her whole life, she never knew just how much her job entailed.