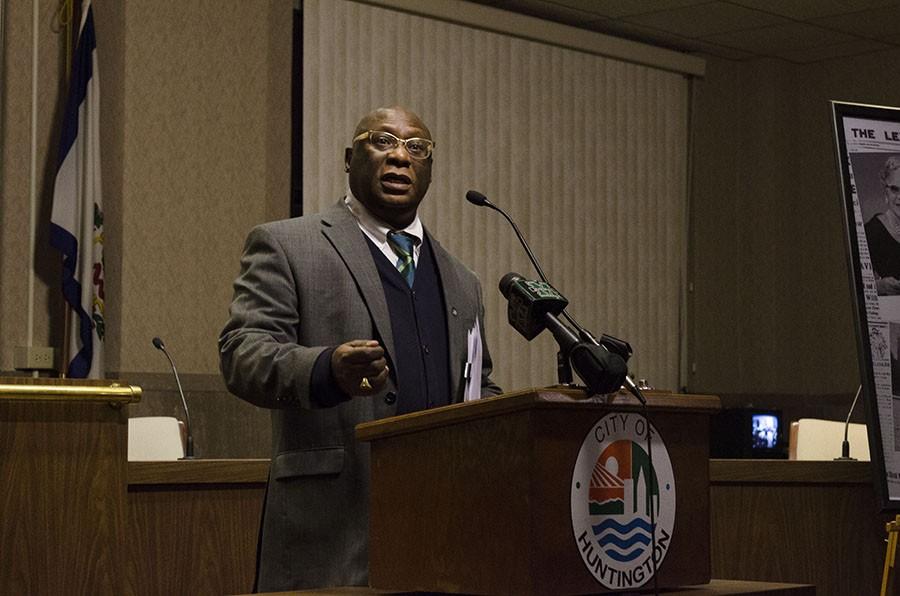 Burnis Morris, Carter G. Woodson professor of Journalism and Mass Communications, presents a lecture on the life of Carter G. Woodson Monday at City Hall. This was the first lecture in the Huntington Lecture Series, and part of the city’s proclamations to honor Woodson during Black History Month.

Morris is a Drinko Fellow and recipient of the 2016 History Hero award.

Morris lectured about Dr. Carter G. Woodson, a former Huntington resident known as the “Father of African American history.” The lecture was a part of a series of events in Huntington and on Marshall’s campus honoring the life of Woodson.

In his early years, Woodson worked in West Virginia coal mines, graduated from Douglas High School in Huntington and later returned to become the school’s principal.

Woodson wrote many newspaper columns and regularly attended events in support of Black History. Woodson was the second African American to earn a doctorate degree from Harvard University and the only child of former slaves ever to receive a Ph. D. in history.

Woodson shaped what would become Black History Month when he announced the celebration of “Negro History Week” in February of 1926.

Some of Morris’ friends were surprised by his devotion to studying Woodson.

“My oldest friends say it’s like I have found a new religion,” Morris said.

Marshall alumnus Victor Simpson was invited to brainstorm how Huntington’s leaders could celebrate the life of Woodson around a year agoand has attended most of the events since.

“We were thinking about whether to celebrate his birthday and how to get more Marshall students involved,” Simpson said.

Williams has also been involved in the Woodson celebrations since their inception. Williams said he finds the subject important and fascinating.

Williams said Woodson’s legacy is important to the people of Huntington because it reminds people of their DNA and how far they can go.

The next event to honor Woodson will be in Marshall’s Morrow Library when Dr. Monica Brooks and Dr. David Trowbridge will present “This Place Matters.”