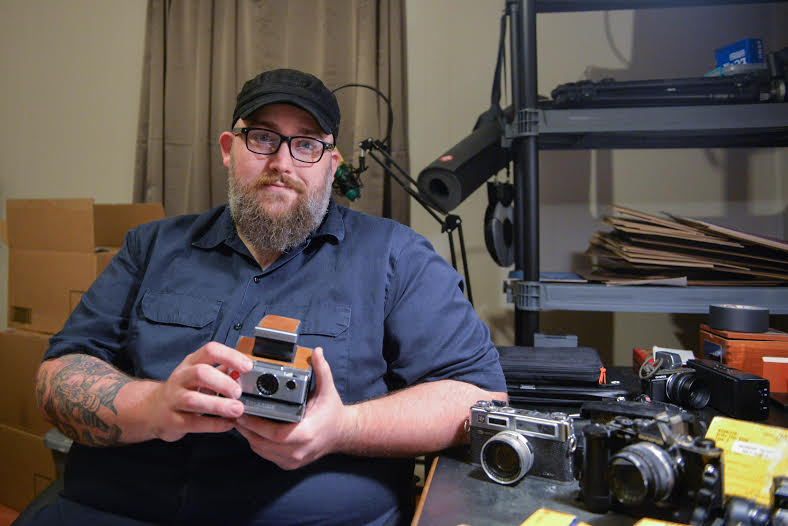 Photography enthusiast Michael Adkins showcases his camera collection inside his apartment on Thursday.

The death of physical media is a fallacy, and the proof lies in the ever-increasing sales of vinyl records and film.

Despite streaming services such as Spotify and Apple Music offering access to millions of songs for only dollars a month, vinyl record sales surged a remarkable 30 percent in 2015, with nearly 12 million records sold.

Nathan Conley, a store assistant at Huntington’s premier music store Now Hear This, said the store has seen a rise in vinyl sales since Record Store Day was founded in 2007.

While many speculate the vinyl resurrection is due to an interest by a younger audience, Conley said he sees an equal representation of younger and older individuals browsing through records at the store.

Additionally, Conley said that there isn’t much of a pattern when it comes to the records that young collectors seek.

“Most kids come in here to buy new records, but then you’ll have a few that will dig for used records for hours and hours,” Conley said.

According to Conley, the length of time that vinyl has managed to stick around surpasses the relatively short periods of time the format has been on the decline.

To Conley, this is due to records being an attractive physical format to own.

“I guess people just like to hold physical copies in their hands. I’ll use my iPhone for music, but I have a turntable too, so I buy records myself,” Conley said.

This paradoxical need to have tangible media in a world where our lives revolve around digital interactions and media is common among record collectors. Sophomore Japanese major and record collector Emily Murray echoed this sentiment.

“I think it’s having something tangible. We are constantly losing the feeling of having things right there at our fingertips,” said Murray.

Murray began collecting records in 10th grade and said it was when she started to get into music on her own. Murray, who has well over a hundred albums, said her collection started with a couple of records her parents had from when they were younger.

While Murray said the majority of her favorite bands are older, she attributes the resurgence of vinyl to modern artists pressing in the format. And Murray’s observation is correct. Last year, Adele’s “25” and Ed Sheehan’s “X” topped the vinyl charts, albums released in 2015 and 2014, respectively.

Additionally, one of Murray’s favorites from her collection, Miniature Tiger’s “Mia Pharaoh,” was only released in 2012.

According to Murray, experiencing her favorite music in the format increases her attentiveness and brings something distinctive to the act of listening to music.

“It’s the fact that you’re paying more attention to it and you can admire it more because it’s something that you physically have,” said Murray. “You can really enjoy the whole album entirely if you sit there and listen to it.”

But the convergence of digital and analog media doesn’t rest on the shoulders of vinyl records. Film and Polaroid cameras are also experiencing a comeback, with Kodak CEO Jeff Clarke expecting the business to be profitable again in 2016, only four years after the film company filed bankruptcy.

Like vinyl, photography enthusiast Michael Adkins sees the revival of film as another way people are trying to escape to confines of their screens and embrace more palpable formats.

In fact, Adkins think that the modern draw to instant film photography is that it gives the photographer the Instagram appearance, but with a physical product in the end.

“In the case of Polaroids or instant photos, you’re going to have a certain appeal depending on the instant film you use,” Adkins said. “Some will have little weird borders on them. Or they definitely have, I don’t want to say quality control issues, but they have a certain aesthetic.”

At the end of every digital versus analog debate, the consumer is forced to answer the question: which is better?

With vinyl, some tests have reported CDs and lossless music files are actually of a higher quality than their vinyl counterparts.

This, however, doesn’t account for subjective measures such as the ear’s preference for the analog warmth that vinyl provides its listeners.

The film versus digital debate doesn’t have a clear winner, either.

To Adkins, it’s all about preference and how people want to make things. While Adkins uses different technologies depending on what he wants to accomplish, he personally prefers digital photography for economical reasons.

This ability to look at the merits of new modern digital formats and compare them to their analog counterparts implies that we might not be headed towards a wholly digital world.

Instead, the growing popularity of vinyl and film indicates that digital and analog media can seemingly coexist.