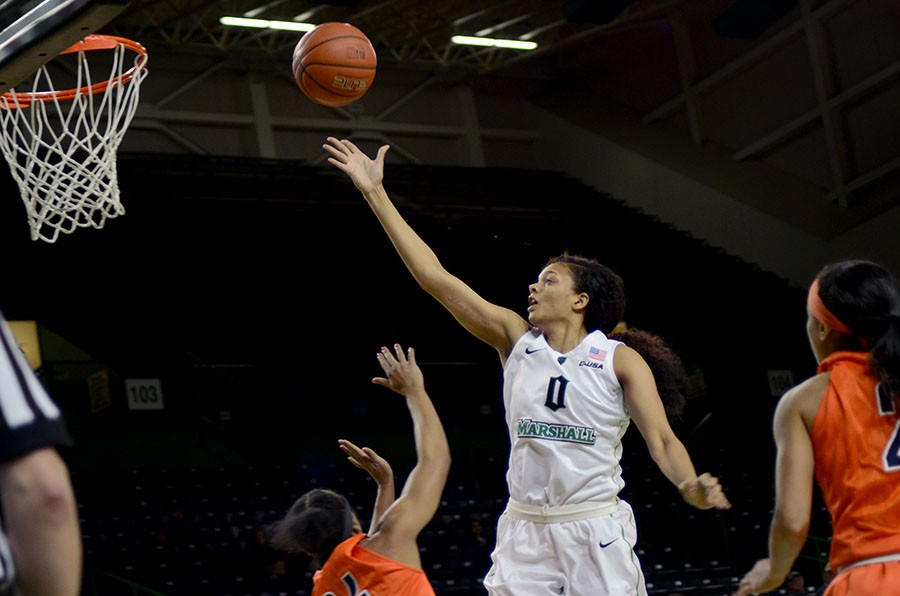 Marshall University redshirt junior Tequila Hamilton goes for a lay up Thursday against the University of Texas at El Paso at the Cam Henderson Center.

The Marshall University women’s basketball team defeated the University of Texas at San Antonio, 80-76, Saturday to push its conference record above .500 for the first time this season.

UTSA jumped out to an early 8-0 advantage over the Herd as Marshall committed four turnovers in the opening minutes. However, the Herd, led by Victrum, battled back to tie the game at 15 before the end of the first quarter.

The second period was a back-and-forth affair as the lead changed hands on several occasions.

UTSA gained a 36-35 advantage heading into halftime after forward Kasia Kiejdrowska, who scored a game-high 29 points for the Road Runners, kissed one off the glass with 21 seconds remaining.

The lead changes continued into the third quarter of play, as the teams swapped advantages until Victrum, who finished the game with 15 points, got her layup to go with 5:13 left in the period to put the Herd on top 45-44.

From there, Victrum and the Herd kept their collective feet on the gas pedal, extending the lead to as many as 12 points, thanks to hot shooting from forward Talequia Hamilton, who buried a 3 from the right of the circle at the start of the fourth quarter.

UTSA responded behind the hot-hand of Kiejdrowska, who scored 15 of her 29 points in the final quarter, helping the visiting team claw its way back into the game.

The Herd watched its lead dwindle even further when UTSA forward Akunna Elonu got her layup attempt to fall, cutting the lead to 78-76. That was as close as the Lady Road Runners would get, however.

On a day when Marshall shot nearly 60% from the field, it was its defense that won the game down the stretch.

UTSA’s Crystal Chidomere had two potential game-tying layups blocked by the Herd’s Shayna Gore and Kiana Evens in the waning seconds of the contest to help seal the Herd’s 80-76 win.

Daniel said despite the Herd’s offensive efficiency, the lack of energy nearly cost the team its third-straight conference victory.

It was the first time the Thundering Herd had gone perfect from the free throw line since March 2009, when it went 18-18 against the University of Memphis.

The Herd finished the game with 19 turnovers, but, despite the ball control issues, the Thundering Herd had success against Conference-USA’s best field-goal percentage defense.

“We did a good job executing the game plan with the game on the line, late. So I’m happy to be where we are with the result that we got,” Daniel said

The Herd will be back in action 1 p.m. Sunday when it takes on Western Kentucky University at home.