The Lion, the Witch and Theology: UKirk lecture connects C.S. Lewis to Christianity 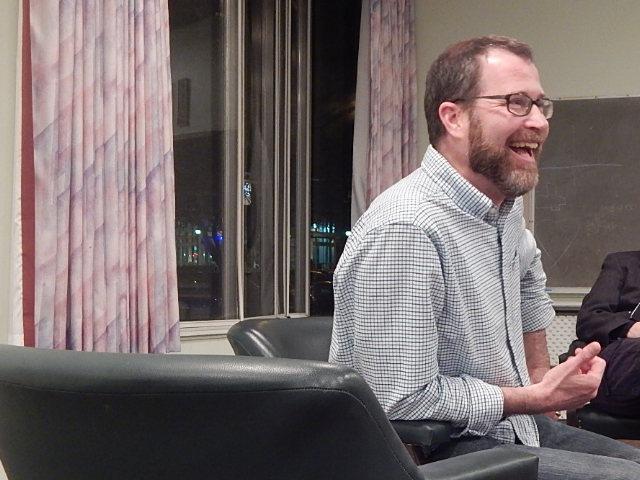 Rev. Rob Laukoter discusses C.S. Lewis and how theology is like a map with UKirk students on Tuesday night at the Campus Christian Center.

UKirk students heard about C.S. Lewis and his ideas on theology as a map Tuesday night at the Campus Christian Center.

Rev. Rob Laukoter, pastor of Presbyterian Church of the Covenant in Hurricane said he has done extensive research on Lewis and this theory.

Laukoter connected this theory to Lewis through the ideals found in his famous work “Mere Christianity.”

“When he says ‘mere Christianity,’ he’s talking about how basic Christianity is,” Laukoter said. “He just kind of makes his argument about why he thinks Christianity is true. This is his apologetic, his defense of the faith. He’s saying why this is a reasonable faith, why it’s reasonable to think and to believe and to be a part of God’s word.”

Laukoter explained why this theology is important to have as a spiritual map.

“If you really think about the Bible, we have an account where people had encounters with God and they wrote down their experiences,” Laukoter said. “They said ‘this is how we came to know who God is.’ When we look at the Bible, what we’re doing is trusting the map somebody has laid out before us and if you don’t have the map you’re not going to get very far.”

Laukoter brought forth many examples of parts of the map illustrated in the Bible to illustrate the importance of this theology in an individual’s life, one of which was marriage.

Sophomore pre-pharmacy major, Brianna Likens said she enjoyed hearing Laukoter’s take on marriage in relation to the plan God laid out in the Bible.

“Hearing the different perspective on marriage and heaven was definitely interesting,” Likens said. “I had never really thought of it like that, as a part of God’s map for life on earth.”

Elder at First Presbyterian Church in Huntington, Monty Fulton said he thought it was interesting to look at Lewis’s work in “Mere Christianity” knowing that Lewis was previously a strong atheist.

“Remember when reading this guy [C.S. Lewis] that he didn’t start out to be a great theologian,” Fulton said. “He was a real good atheist and went out to prove that God did not exist. And well, he failed that one pretty miserably and ended up becoming a Christian out of all of it.”

Laukoter emphasized while it is important to study theology, individuals should not become so caught up in it that they lose the emotional side of Christianity. Like in all things, it’s vital to find the right balance between the two.

“You’re not going to get very far on just a feeling of the presence of God,” Laukoter said. “It’s not really going to teach you about the depth. How can you learn about God’s love, his mercy, his compassion except by looking at the map? The other problem is that if you only look at the map all the time, then God just becomes an idea, he’s just a set of doctrines. You have to have both.”