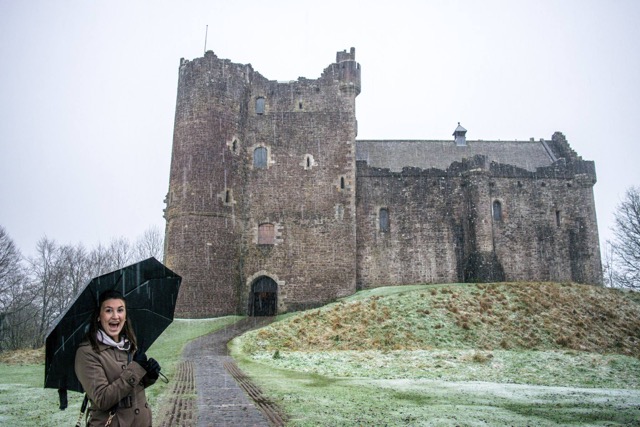 Shannon Lester poses beside the Doune Castle in Scotland during her semester abroad.

A Marshall student spent three months last semester studying at Anglia Ruskin University in Cambridge, England.
Shannon Lester, an advertising major at Marshall University, finished her capstone in her junior year at Marshall and was looking for a way to fill her time. She decided spending a semester in England was the best way to do that.
Marshall University and Anglia Ruskin University have a bilateral exchange program, meaning the student pays the tuition and fees of Marshall and room and board of Anglia.
While at Anglia she did what every international exchange student does; she took classes. The classes available to Marshall students are business, criminal justice, and communications.
“I took digital media theory, media in politics, and then I took an introduction to video class. They’re a pretty film-heavy school,” Lester said, “Then, I finished my psychology minor so I took a psych. class.”
Attendance was something else that was unique from American attendance. At Anglia Ruskin, attendance is counted by “tapping in.” “Tapping in” refers to tapping your student ID card onto a black bar when you walk into the class to show you’ve entered the room. Lester described them as “pretty high tech.”
The set up of classes in the UK is different than here in the US, but Shannon didn’t let that interfere with the experience.
“They are very theory-based, where we are more practical application and I didn’t have assignments due throughout the semester,” Lester said, “I just had to go to class; and then seminar for class; and then I had two huge essays at the end.”
While at Anglia Ruskin University, Lester took advantage of being able to travel to other cities, like London, Bath and Dover.
“In Bath, I got to go to the Roman Baths. Bath is just beautiful,” Lester said, “In Dover, I went to the Dover Castle, which was awesome; the best castle in England, and I saw the White Cliffs of Dover.”
Lester also ventured outside of England with her friends to Ireland and Scotland. She toured the distilleries and saw Trinity Library in Ireland.
“I went to Edinburgh and basically just went all over the city. I climbed this mountain in the middle of the city,” Lester said, “and then I did a tour of the Highlands. Scotland was my favorite; it was awesome.”
While in England, Lester witnessed the celebration of Guy Fawkes Day. Guy Fawkes was a member of a group that plotted to blow up Parliament in 1605 because James I wasn’t tolerant of the Catholic religion. It’s a night of bonfires and fireworks in Cambridge. Lester said, it was the best fireworks she’d ever seen.
Although England and America have their similarities, such as the language, there are differences, like food and certain objects have different names. British food can be less sweet and a little bland compared to American food. The brands of food are also different; this Lester said took some time to learn. What we call trash cans, the British call “rubbish cans.” There’s also getting use to walking and driving on the opposite side of the street.
“I adapted just by living there. I had a routine,” Lester said. “And by the time I left, I was pretty comfortable with the British way of life.”
Although there are these differences, Lester gained a lot her experience abroad.
“I’d say the biggest thing I gained was cultural experience,” Lester said, “I grew as a person more than I thought I would.”
Lester spent her free time with the 20 international friends she made while at Cambridge.
“I had friends from all these different countries that taught me a lot about other people and the world,” Lester said, “I feel like Americans just think about America; there’s so much more going on. It really just opened my eyes to the rest of the world.”
Lester said she loved her experience in England and would recommend it to other students. She said the most important thing is to start preparing now.
“You have to figure out how you’re gonna handle your money, you have to figure out where you’re going to live,” Lester said, “and you have to figure out how you’re going to budget your money and you know, survive for three months and do all the things you want to do.”
Lester said once the planning is done and you’re over there, everything is relaxed.
Cheyenne DeBolt can me contacted at [email protected]