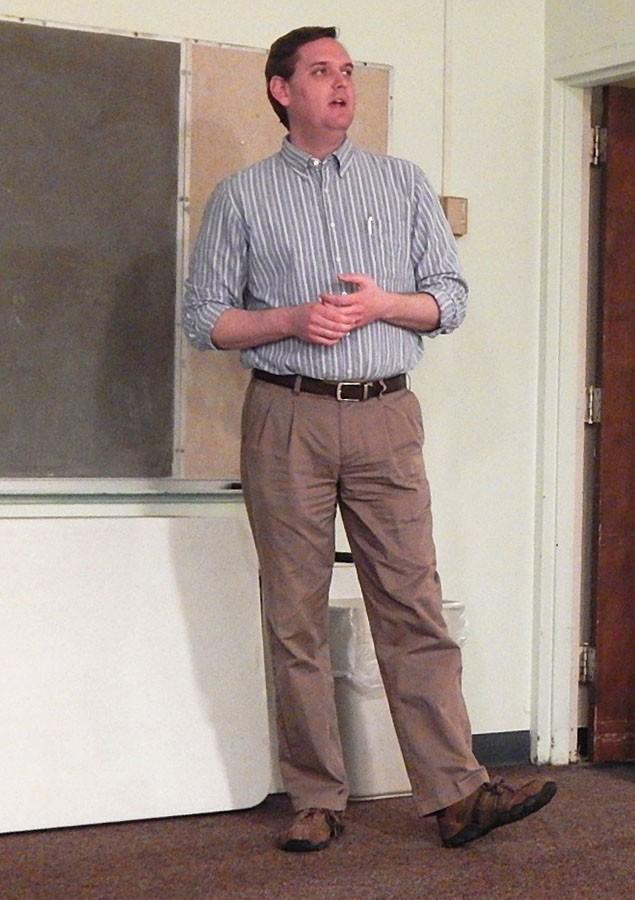 UKirk students heard from Marshall University alumnus Tuesday about what the crucifixion of Jesus was like from a medical standpoint.

Adam Franks is a graduate from the School of Medicine at Marshall and is currently a professor of Family Community Health. During his time as a student at Marshall, Franks said he was a member of UKirk.

“I was here when UKirk was called PROWL (People Reaching Out With Love),” Franks said. “Twenty-five years ago I was sitting right here in this same room where you guys are now.”

Franks said he became interested in studying the medical aspects of the crucifixion while he was a college student.

“When I was in medical school, we got a lecture from one of the professors about this subject,” Franks said. “It wasn’t a mandatory lecture, it was just a ‘for fun’ lecture around Easter time. I thought it was a really amazing thing.”

This wasn’t the first time some of the students had heard about what happens to the body during crucifixion. Freshman, Emily Underwood said she heard a similar lecture when she was young.

“When I was in Sunday school, during middle school, we did a talk like this, where it got nitty-gritty,” Underwood said. “We were a little too young to be having this conversation, so it’s nicer to hear it now, when I’m older and not as freaked out.”

Sophomore, Raisa Nuñez said she has been coming to the club weekly, but was intrigued to learn that UKirk would be hosting this lecture.

“When I heard they were doing this lecture, I really wanted to come because of my biomedical background,” Nuñez said. “When you hear details, it just sets another dimension to the fact that this actually happened, this is real.”

Nuñez said she felt this lecture was beneficial to everyone, despite denomination or belief.

“As Christians, we’re the body of Christ,” Nuñez said. “Being able to come together as different parts of the Christian community to share what we know and our take on Christ’s message is really empowering. Looking at the crucifixion from a medical viewpoint, that just hammered it home. You understand things a little deeper. I think it’s beneficial for anyone, Christian or not, to understand.”

Franks said despite the fact crucifixion is a grueling subject, he feels it is important to hear this story so that a more important message can be understood.

“I know I’ve kind of brought you through a gruesome and gory tale here, but the important thing is that the cross is now empty,” Franks said. “We believe Jesus went through all of this for us. This is the most important message of all.”