Hugs of Hope comfort children in times of need 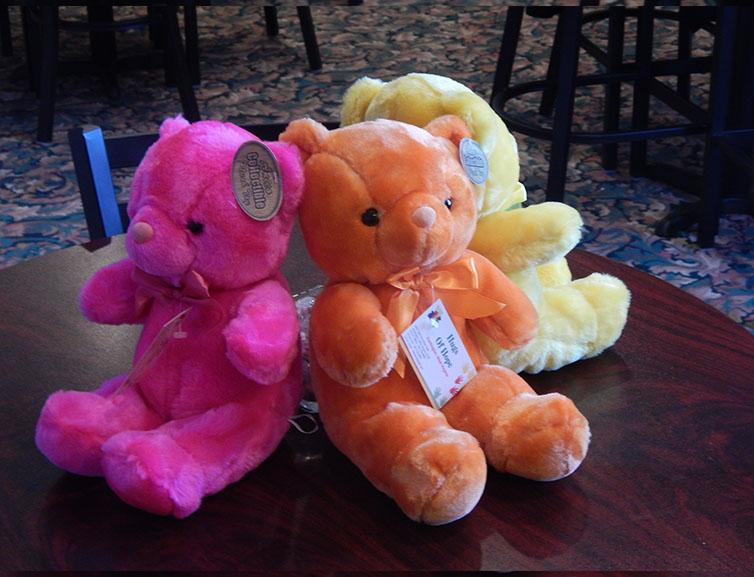 Troy Alexander/The Parthenon Hugs of Hope bears, displayed above, are delivered to children in times of tragedy.

Hugs Across America is a national charity that was started by New York school teacher Sue Lucarelli at The Churchill School in lower Manhattan on the morning of September 11, 2001.

Many children in her class were terrified, and she had one teddy bear setting on her desk. She was trying to calm the children in anyway possible, so she had them pass the bear around the class and give it a hug. She then promised to bring more the next day, going out that night and buying as many bears as possible, returning the next day and making sure every child got one. This ended up being the first group of kids to be helped by an organization that now has a chapter in nearly every state.

On January 2, 2006 the Sago mine in Upshur County, West Virginia exploded, killing 12 miners and devastating a small community. Hugs Across America sent a shipment of bears to kids in the community trying to offer them some small comfort, marking the first time the organization made an impact in West Virginia.

In 2010 Fred and Amber Kitchen, owners of Henson & Kitchen Mortuary, stumbled across the national chapter while looking for a way to help their community.

Shortly after discussing their idea of opening up a local chapter with their daughters, Annalise and Arabella, Amber Kitchen stopped her work as a teacher for Springhill Elementary and started devoting her time to Hugs of Hope, their local branch.

“I have always had a passion when it comes to working with children,” Kitchen said.

With the help of her daughters and husband, they soon were delivering stuffed bears to places like the Hospice House, Huntington Fire Department, Cabell Huntington Children’s Hospital and local schools. Most recently they visited Springhill Elementary after a fire claimed two students lives.

“Usually we just drop the bears off and let the nurses or whoever pass them out. This was the first time we had been in the classroom setting handing them out and seeing the kids reactions,” Kitchen said.

“If something as simple as giving a child a bear takes that anxiety or fear away for even a second, then it is worth it,” Fred Kitchen added.

It costs five dollars for one bear, and contributions of any amount are taken. Donations can be made to Hugs of Hope WV, or sent to 6357 East Pea Ridge Road.