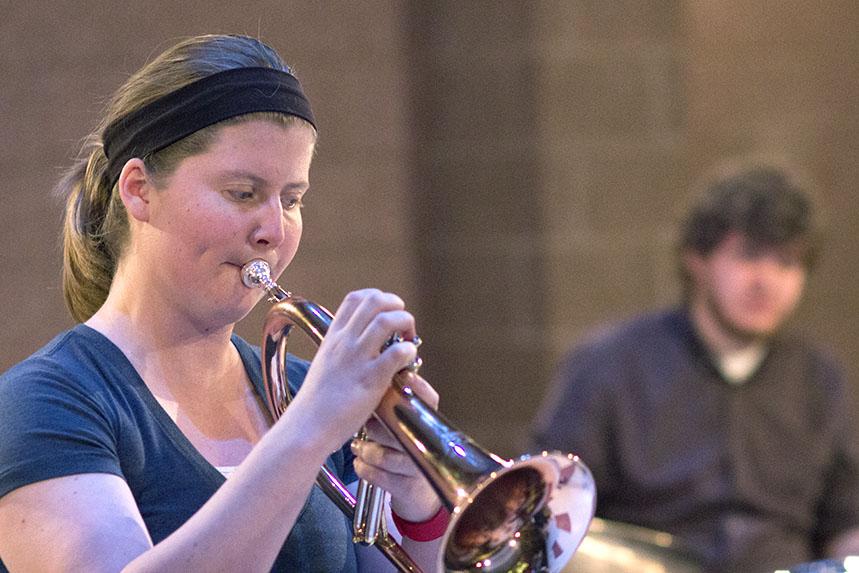 “Relaxin’”, originally released by the Miles Davis Quintet in 1958, had a large impact on performers in the Marshall ensemble.

“The Miles Davis Quintet and this arrangement in particular are kind of a baseline and really set the precedent of where music was going.  It kind of looked at where music was and looked into the future,” said Lars Swanson, tenor saxophonist.

The music, performed by Jazz Combo Blue last semester, was a montage of different works, so turning its focus to a legend like Miles Davis proved to be an exciting new undertaking.

“Miles Davis is one of the most iconic jazz musicians and especially jazz trumpet players, so listening to him and learning his music was a lot of fun,” Andrea Withee, Jazz Combo Blue Trumpeter, said.

The group practiced together throughout last semester, but between winter break and last week’s snow, had a daunting task putting the finishing touches on the show.

“With the winter break in between last semester and this performance we had a little bit of a crunch and then we had to postpone it because of the snow,” Swanson said.  “We aren’t all from Huntington so we were only able to have a couple rehearsals over break.”

“The unique thing about this is that it was more of an extracurricular thing that the students decided to put together, they wanted to show the work they had done at the end of last semester” director Steven Heffner said. “They really are doing it for the love of the music and nothing else.”

The next event from the School of Music and Theatre, “MUsic Alive: Schumann A Dream”, will be held Friday, Jan. 29 at First Presbyterian Church, Fifth Avenue, Huntington.