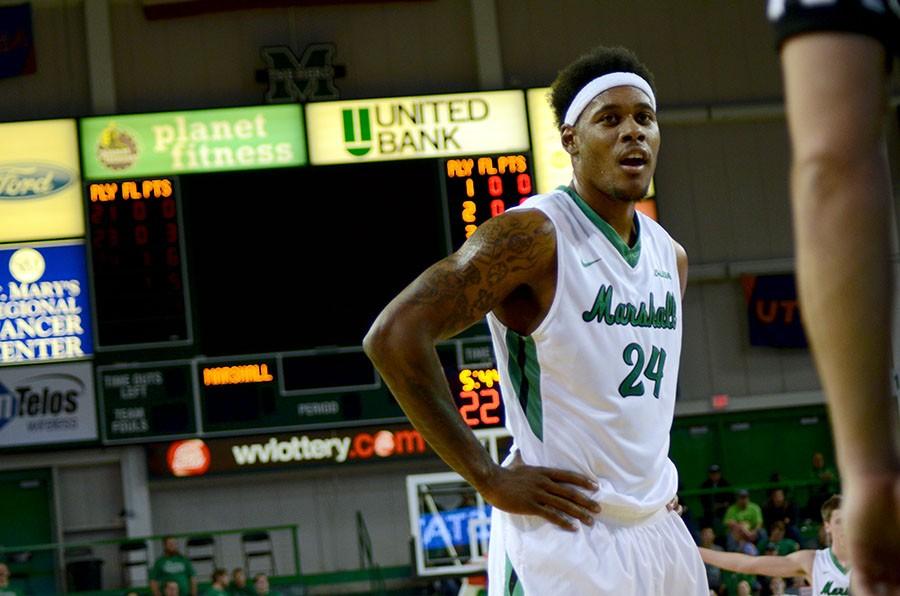 Marshall University senior forward James Kelly waits for the ball at the free-throw line during a game earlier this season at the Cam Henderson Center.

Kelly, who registered his Conference USA-leading 10th double-double of the season, scored 21 points and grabbed 12 rebounds — both team highs — in  Marshall’s win at the Ted Constant Convocation Center in Norfolk, Virginia.

The largest lead of the game came with 4:32 remaining in regulation as the Herd led by eight. However, a 10-2 run by the Monarchs tied the score with nine seconds to go.

Following Marshall’s timeout, the game resumed on an inbounds play. Kelly took the inbound pass from sophomore guard Jon Elmore and rose over a defender to hit the game-winning shot.

Freeman attempted a game-tying shot on the other end but failed to connect.

Marshall head coach Dan D’Antoni said he thought his team did a great job preparing for the game in a difficult playing environment.

The win was the Herd’s first victory in Norfolk, Virginia.

“It’s a great venue,” D’Antoni said in a news release. “I love this arena, but I was proud of our guys. They hung in there tough. I know they’ve been fighting to get that victory here.”

The last time the two teams met in February 2015, Middle Tennessee defeated Marshall, 90-51, at the Murphy Center in Murfreesboro, Tennessee.