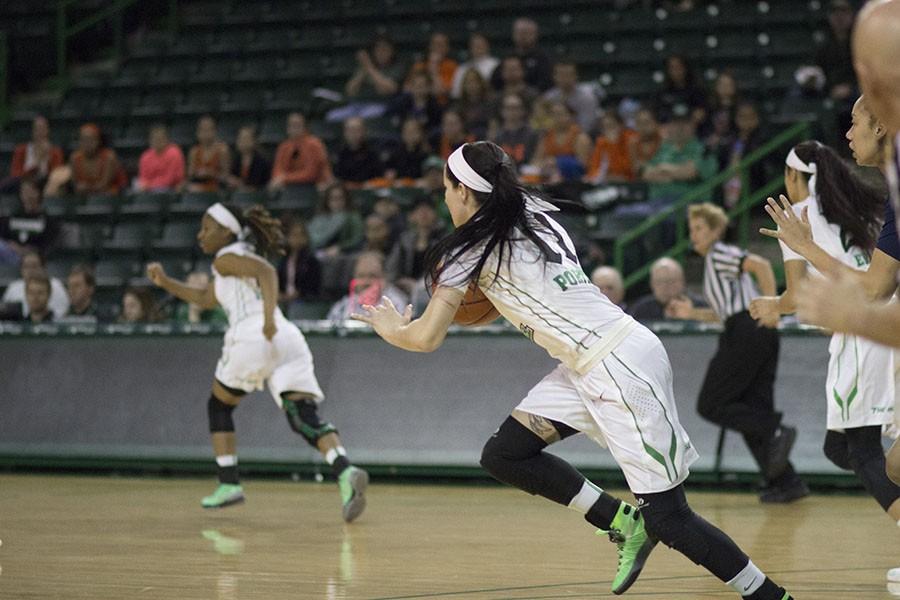 After Thursday’s last-second loss to the University of North Carolina at Charlotte, Marshall women’s basketball coach Matt Daniel said his team needed to come out of the gate with more intensity to put itself in better position to win conference games.

In the opening frame of Sunday afternoon’s conference clash with the Monarchs, a game which was delayed from its original tip-off time of 1 p.m. Saturday, the Herd filled the stat sheet en route to a 21-point first quarter, a far cry from the mere nine points Daniel’s team mustered in the opening quarter Thursday against Charlotte.

Despite the hot finish to the quarter, the opening moments were as inauspicious as those of the opening period of the matchup with Charlotte.

Neither side scored until nearly one and a half minutes into the game, when Kiana Evans made her first free throw of the afternoon at the 8:27 mark.

After ODU tied the game with a free throw of its own, Marshall was able to peel the lid off the basket from 3-point range. On back-to-back possessions, senior guard Norrisha Victrum and redshirt junior forward Talequia Hamilton connected on shots from downtown, helping to extend the Marshall lead to 7-4.

The two squads would trade buckets for the remainder of the quarter, with the Herd taking a 21-15 lead heading into the second quarter, despite leading scorer and senior forward Leah Scott recording zero points through the first 10 minutes of action. Scott’s scoreless night was quickly eradicated early on in the second quarter, however, as Scott got the second frame scoring started with a layup just 11 seconds in.

As the quarter progressed, Marshall began to expand its lead.

With just 3:47 left in the half, the Herd led 32-17 over the visiting Monarchs, as its perimeter defense suffocated the sharpshooters of Old Dominion. However, the Monarchs closed the half on a 10-2 run that cut the deficit to 34-27 at the intermission.

After watching its lead dwindle heading into halftime, Daniel’s squad came out in the second half looking to score inside. Hamilton and company forced the issue down low, trying to get the post players of Old Dominion into early foul trouble.

Just 10 seconds in, Hamilton got to the free throw line and knocked down both free throws. On the ensuing possession, the Herd would ventured beyond the arc, with sophomore guard Taylor Porter hitting a 3-pointer to swell the Marshall lead back to double figures.

However, ODU cut the deficit to single digits after Destinee Young took the pass from Keyana Brown, laying it up and in to make the score 39-31. The eight-point margin was as close as the Monarchs would get the rest of the game. The Thundering Herd would close out the third quarter on a 20-12 run, as its lead inflated to 59-43 heading into the final quarter.

After the final buzzer sounded and the Herd picked up its second conference win of the season, Daniel said his youthful group of players have begun to mature.

“The youngest team in the country has grown up pretty well,” Daniel said.

The Herd finished the afternoon shooting 39 percent from the field and 40 percent from long-range, as well as forcing 13 turnovers and assisting on 12 of the 21 made buckets.

“What an unbelievable crowd,” Daniel said. “Like I said, Huntington was in a state of emergency yesterday, the game was scheduled to be played yesterday and on a snow day, on a day a game isn’t supposed to be scheduled, roads are bad, conditions aren’t great, we had a great crowd and I think that helped tremendously.”

The Herd (13-5, 2-4) will be back in action 7:30 p.m. Thursday when it travels south to Tennessee to take on Middle Tennessee State University.