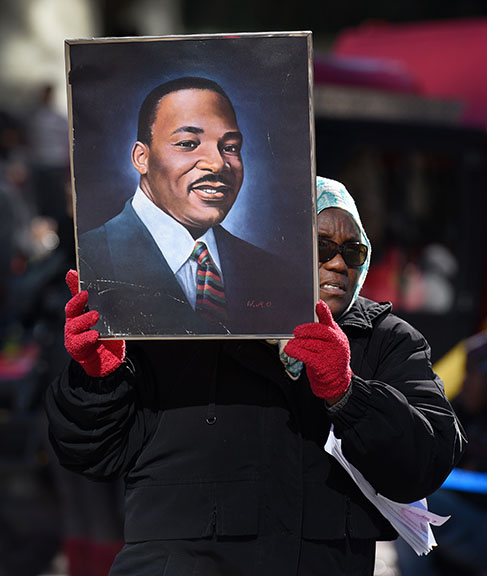 King’s ideas can still be seen growing and changing in today’s society.

Here are four of Martin Luther King Jr.’s most prevalent ideas about civil rights, equality and life in the United States that are still important today.

“For in a real sense, America is essentially a dream, a dream as yet unfulfilled. It is a dream of a land where men of all races, of all nationalities and of all creeds can live together as brothers.”

Despite the progress that the United States has made since the 1960s, there is still a lot of ground to cover before all men (and women) will be treated equal.

The year 2015 saw the Supreme Court ruling allowing same-sex marriages in all 50 states, a rise in requirement of police to wear body cameras at all times and continued outrage against Donald Trump’s call for a ban on Muslims in the U.S.

These events all pointed to the U.S. taking steps in the right direction to finally obtain the ideals of the “American Dream.”

“A Look to the Future”

The U.S. is a young country, but it has an extensive and complicated history. This history is vitally important in understanding where the nation is headed in the future.

King is an important piece of the history of African Americans in the U.S. The study of his life, work and speeches is key in understanding the obstacles minorities had to overcome to get where they are today.

“A Statement by Dr. King”

“It must be remembered that genuine peace is not the absence of tension, but the presence of justice.”

The incidents in Ferguson, Missouri after the shooting of Michael Brown showed just how important the presence of justice is to people in the U.S.

King fought for justice for African American people during segregation. The fight for justice is still rampant today, especially with the spreading use of social media allowing news to travel faster than ever.

“Address at Conference of Religious Leaders”

“There has been some progress, but even the most casual observer must admit that we are far from the Promised Land in the area of equal job opportunity.”

Job equality is not only a race issue. There has been growing attention to the difference in pay between men and women. California passed a pay equity law in October 2015 in an effort to close this gap.

Elected officials in some states are still working toward equal pay and opportunity for all people.

Martin Luther King Jr. Day isn’t just about remembering King’s life and legacy. It’s about celebrating the progress that America has made in race relations, equality and civil rights throughout the years.

Nancy Peyton can be contacted