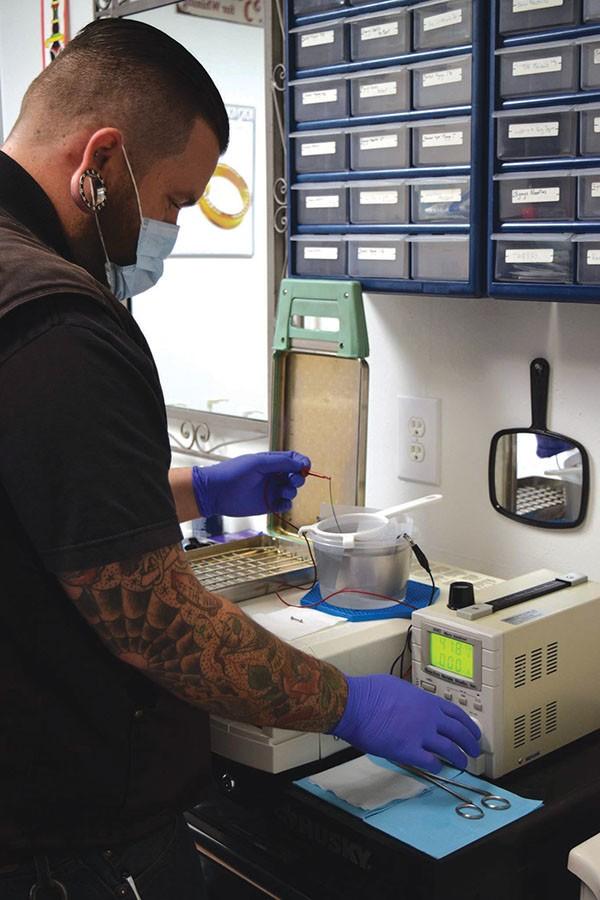 Prestige Piercing owner Anthony Watts anodizes all of his own body jewelry to make specialized colors such as blurple.

“Blurple” is a common color of jewelry Anthony Watts’ customers request and purchase at Prestige Piercing on Sixth Avenue in Huntington.
The color blurple is a mix of blue and purple hues creating an iridescent color that has become wildly popular at Watts’ piercing and fine body jewelry shop.
To create this unique color, Watts uses a process known as anodizing to change niobium and titanium jewelry into almost any color on the spectrum.
For almost six months, Watts has been anodizing his own pieces in store rather than purchasing colored jewelry from companies. Blurple is just one of his customers favorites.
“It’s a cool color, it really makes opals and crystals pop and stand out in pieces,” Watts said.
Watts said as far as he knows, he is still one of the only technicians anodizing jewelry in the state, and the unique specialization draws in more customers.
“I have people come from everywhere,” Watts said. “Eastern Kentucky, southern Ohio and pretty much all of West Virginia.”
Watts said he has even had customers travel from areas around Virginia, which surprised him.
Prestige Piercing has been open for roughly two years now, but Watts has been practicing piercing for close to 10 years.
Watts said he truly enjoys the art of piercing and plans to pierce as long as he can as a career. Watts said he enjoys all aspects of the job including the sanitation process and practice.
“I just nerd out when I see high end pieces of jewelry and I get really into sterilization and the whole process of piercing in general,” Watts said.
Watts has his own anodizer in shop and said he spent hours at night after his 5 year-old daughter went to sleep to try different voltages to get different colors.
Anodizing is an electrolytic passing process that increases the thickness of the natural oxide layer on the surface of metals. The thickness of the oxide is controlled by the voltage and forms different colors.
Watts said he only uses quality grade jewelry and always follows industry standards as well as sanitation standards. Watts has Red Cross blood borne pathogen, adult first aid and CPR and Occupational Safety and Health Administration exposure control training.
The anodizing process brings in an array of Marshall University students and Marshall fans who enjoy the iridescent green Watt’s creates in the anodizer.
Marshall student and Prestige customer Courtney Lagowski said she loves Prestige Piercing and is excited about anodized pieces.
“There’s so many cool colors he can make,” Lagowski said. “I would love to have Kelly green jewelry for game days that I know is safe to wear.”
Watts said he still loves his location on Sixth Avenue but he hopes to one-day move to the Pullman Square area.
Watts is currently the only technician at Prestige, but Watts said he would love to one day train another technician to work with him.
“I one day want to train someone to do piercing but it would take years before they got to the point where they would work on clients,” Watts said.
Watts said he can anodize any niobium or titanium jewelry from his store and can match color to other pieces brought in to the shop.
Prestige Piercing is located between Eighth and Ninth Street on Sixth Avenue and open noon to 6 p.m. Tuesday through Saturday.
Ashley Sodosky can be contacted at [email protected]