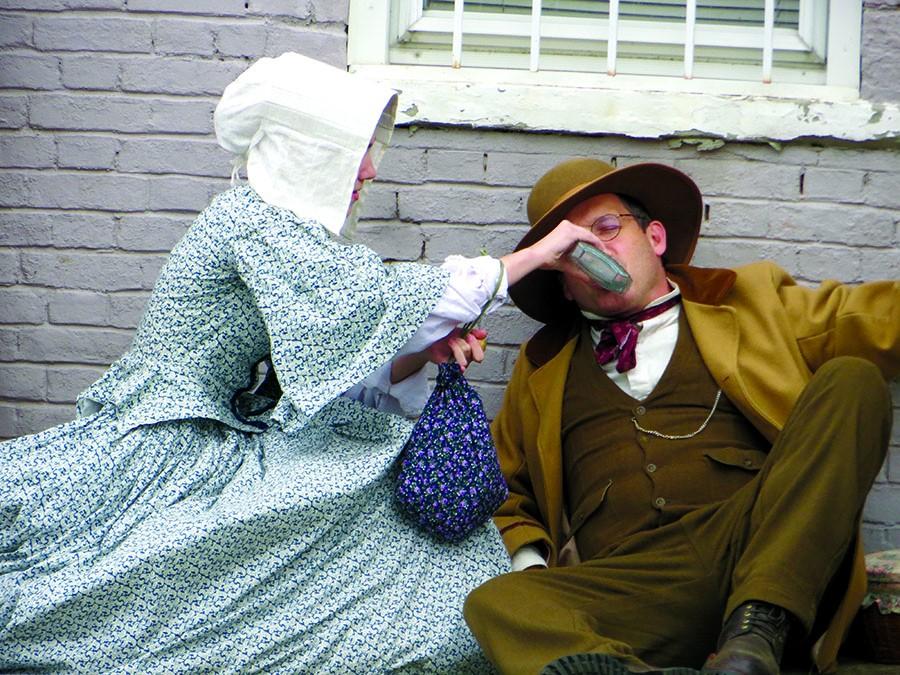 Shannyn Kyle, 16, a member of the Lizzie Cabell’s Finishing School for Young Ladies, aids Andrew Gooding during the reenactment of The Battle of Guyandotte.

It has been said, in many different ways, those who do not learn from history are doomed to repeat it.
In a year when many people believe their history is being altered by those who deem it to be unfair, unjust, inappropriate or worse, there are those who are determined to keep it alive.
The Civil War was the bloodiest and deadliest war ever fought on American soil, claiming the lives of more than half a million.
“The Civil War should not be honored, no war should ever be honored,” Jean Hilton read as the annual Guyandotte Civil War Days ball comes to a close. “But the men that fought for their beliefs should be.”
To many men, women and children across the Eastern United States, reenacting the Civil War is a way to preserve the history that changed the country forever.
Hilton, who has been reenacting as a widow named Miz Rosebud for over 25 years, closes each ball with these words.
“For in so doing, they changed the United States profoundly and there by changed the whole world,” Hilton said.
Civil War reenacting is done in many different ways with different levels of accuracy and intensity. Events like the annual reenactment of the Battle of Gettysburg, are kept as historically accurate as possible in order to teach the public about the past. However, some reenactments are considered to be more “hardcore” and involve marching into the middle of the woods with everything needed for the weekend to camp and live like a Civil War soldier.
Civil War reenacting has many different aspects, which can accommodate everyone, frequently making most reenactments a family affair.
“I remember a couple times before he left, looking at all the stuff in the truck and in the garage,” Logan Sirbaugh, 16, recalls how he got involved in reenacting with his father.
“Once I was old enough to go, I borrowed some of his uniform and went with him,” Logan Sirbaugh said.
Logan Sirbaugh and his father Dan travel from Parkersburg, West Virginia, to reenactments all over the area.
“This year we traveled to about 15 of them,” Logan Sirbaugh said.
“Gettysburg was the farthest,” Dan Sirbaugh said.
The father and son travel together almost every weekend between March and October to different Civil War reenactments.
“There’s only been about twice in a year we’ve had two weekends in a row off,” Dan Sirbaugh said.
The Sirbaughs are not the only parent-child reenacting duo. Lisa and Shannon Rawlinson of Huntington said they enjoy going to reenactments together as well.
“I got sucked in through Major Sheets,” Lisa Rawlinson said.
Mike Sheets teaches history at Huntington Middle School and also runs a Civil War reenacting club for middle school boys known as the Western Virginia Military Academy, or WVMA. The club’s sister group, Lizzie Cabell’s Finishing School for Young Ladies, is a reenactment group for middle school girls.
“My daughter came home every day from school saying, ‘I hate history,’” Lisa Rawlinson said. “One day she comes home talking about this Civil War group she wanted to join.”
“I still hate all but Civil War history,” Shannon Rawlinson, now a freshman at Huntington High, said. Shannon Rawlinson continues to be actively involved in Lizzie Cabell’s Finishing School for Young Ladies, as a mentor to the younger girls.
The two Huntington Middle School reenacting groups participate in many events together. The groups strive to teach history, as well as a variety of other life skills, through interactive activities.
“They learn history, they learn general etiquette, they learn responsibility,” Lisa Rawlinson said. “I just think it’s nice that they get to go a certain number of hours or days without electronics.”
The Rawlinsons said they enjoy reenacting together and usually attend four or five reenactments a year.
Civil War reenacting is a popular hobby, trade or lifestyle, depending on how one chooses to view it. Whether a reenactor chooses to participate in highly historically accurate events or those considered more “hardcore,” most reenactors have one thing in common.
As Hilton, or Miz Rosebud, concludes her speech each year, “We remember, we care.”
MacKenzi Kyle can be contacted at [email protected]