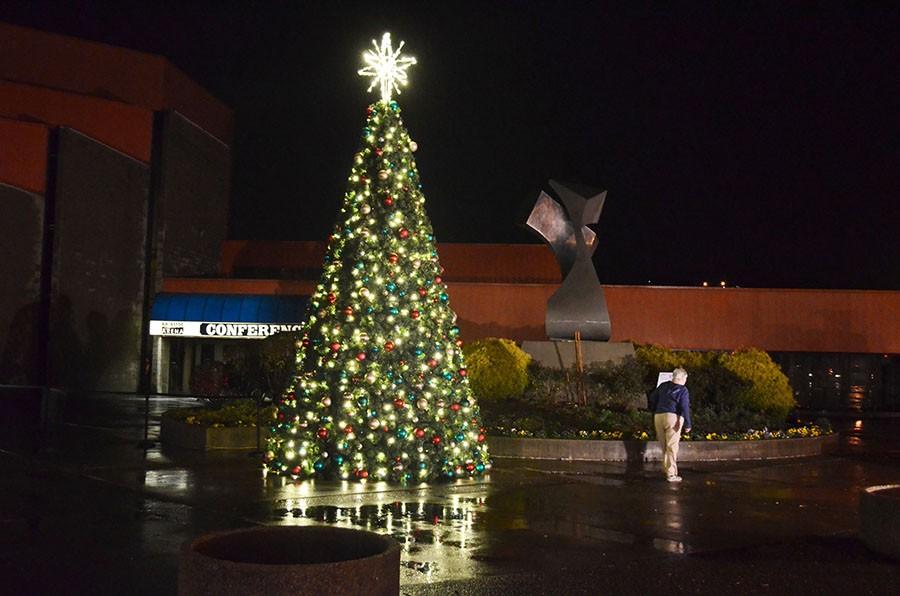 The 19-foot-tall Christmas tree at the Big Sandy Superstore Arena has over 170 lights and 600 bulbs.

This is an annual event at the Big Sandy. This year Williams wanted to make sure Huntington looked good for the upcoming holidays.

“We are not going to copy what everyone else is doing,” Williams said. “What we want is when people come into the downtown in 2015, they are able to say ‘you should have seen what it started.’”

Before the lighting, Cabell Midland’s Huntington Dance Theater and the Cabell Midland Show Choir performed Christmas themed music and dance in the entrance of the building.

For the most part, people were there because of the performance, but were excited to see the tree being lit.

“I think the ceremony went fairly well,” said Taylor White, whose son performed at the event. “As far as the performance and everything, the ballerinas looked sharp, it looked like they were having fun.”

“The Christmas tree looks nice, it was a very good decision,“ said Eric Sargent, whose daughter was preforming. “The highlight for me was seeing the countdown for the tree being lit.”

“I think the Christmas tree is gorgeous, it’s about time for a new tree and decorations,” Frances Adams, a grandmother of the performers, said.

According to Cara Hedrick who is a marketing and sales manager at the Big Sandy Superstore Arena, this year a fake tree was used instead of a real one like in years past.

The tree itself can be added to and will be reused for the future events.

More than 170 lights and 600 bulbs were used on the tree. The tree is about 19 feet tall. On top of the tree, a white star was placed for decoration.

Huntington Municipal Authority purchased the tree and its decorations, which were placed on Fourth and Fifth Avenue.

After the ceremony the tree lights were turned off.