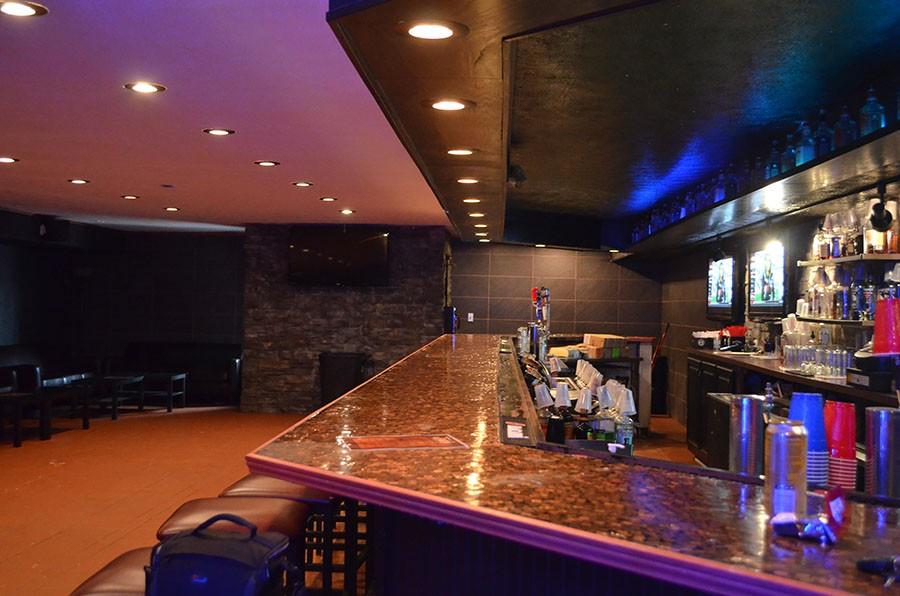 Downtown Huntington is home to a selection of different bars that appeal to a wide variety of people. Among those bars is Jake’s Sports Bar. Over the summer, Jake’s remodeled in hopes of attracting a new kind of crowd.

Jake’s owner Jacob Morton expressed that the bar needed to be remodeled because the bar opened in the ‘90s. Morton said he wanted to transform the bar into a 21-and-up environment to keep Jake’s in Huntington for years to come.

“I’ve been in the bar business for 17 years now and it seems like the 18-and-up bars they have a really, really short shelf life,” Morton said. “I mean they’ll be real popular for a year to four years. The 21-and-up bars have a lot more longevity and so we were hoping to create a nice atmosphere for an older crowd and this place will be around a little bit longer. ”

The newly remodeled Jake’s opened Aug. 22 2015 and showcased a new open layout, a new bar and an expanded patio area. The new bartop is made up of pennies, an idea that was suggested by Morton’s wife after she had spent a little time on Pinterest.

“My wife gave me the idea for the bar top. She was looking around online,” Morton said. “We were trying to find a unique idea and she said ‘Let’s try a penny bar.’ I didn’t even know what it was. She showed me some pictures and we ran with it from there.”

The bar isn’t the only new thing at Jake’s. Morton has started adding live music to the new atmosphere. Musicians from Huntington and areas outside of the Mountain State have played at Jake’s.

The drink selection at Jake’s has also changed. Introducing new drinks is something Morton said he thought was important to keep people interested with the bar.

“I wanted to build a different drink selection here,” Morton said. “We’ve been basing a lot of our new drinks on bourbon. I have one of the best bourbon selections in Huntington. Trying some different avenues.”

Since opening the remodeled bar, Jake’s has experienced a few bumps in creating a new reputation and leaving the old one behind.

“It’s been building,” Morton said. “Granted, it was a little bit of a rocky start because everyone still had that impression that we were the freshman bar. It’s been a building process, changing out the old crowd and getting the new one back in.”

Morton was the driving force behind the complete remodel and expresses his hopes of adding new features such as a kitchen and a full outdoor bar on the patio.

“We are going to try and add a few things going into the spring and summer,” Morton said. “We are thinking about adding a full bar on the patio for next year and possibly adding a kitchen within the next couple months. I don’t want to do anything over extensive. We want to do something besides a burger. We are looking for a different bar food that not everyone has.”

When designing the remodel, Morton was focused on making Jake’s a place where anyone could come and have a good time regardless of their usual crowd. Bars around Huntington cater to the needs of specific cliques, but Morton wanted to break away from that idea.

“I wanted to have a real even and roundabout mix where you don’t have to be part of a clique to have good time,” Morton said. “I want everyone to feel accepted and everyone to come in and say ‘Oh this is a bar for everyone, not just a certain group’ like a lot of the other places.”

In the midst of violence in the Huntington bar scene, such as the Whiskey Rock’s shooting, Jake’s is putting safety at the top of its priority list.

“Another main thing we were really going for is safety,” Morton said. “There has been so many problems in Huntington over the past few years with this violent act and that violent act and a bunch of stupid stuff happening at bars like the Whiskey Rocks incident a couple years ago. Our main focus was keeping it really safe and chill environment.”

In order to keep their customers safe, Morton takes the hiring of his staff very seriously. Morton hand picks his bouncers based not only their physical appearance, but also their experience as a bouncer.

“If you saw my bouncers, it kind of speaks for itself,”Morton said. “Anyone can hire four or five younger guys to work the door, but you need an experienced staff. Most of my guys have been working in bars for five to 10 years. They’ve been there, they’ve been in the middle of it and they know what to look for. They all do a really good job.”