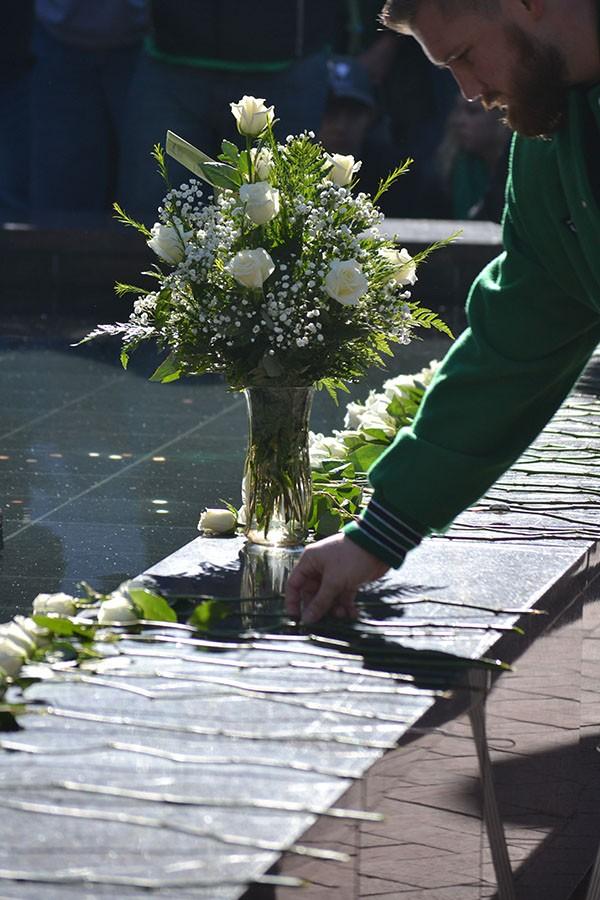 Each rose laid on the fountain represents one of the 75 people who died in the crash.

People packed the Student Center Plaza Saturday morning for the annual Memorial Fountain Ceremony commemorating the 75 people who lost their lives in the 1970 plane crash.

This year’s ceremony took place on the day of a home football game, which was the sixth time the Herd has played a game on the Nov. 14th anniversary.

Doc Holliday, Marshall head football coach, said the players would carry on a tradition started two years ago by wearing a “75” decal on their helmets to represent the lives lost in the crash.

“I told them this morning at our meeting that when that ‘75’ goes on that helmet you play harder,” Holliday said. “Understand that when they step on that field, they’re playing for more than just their teammate and themselves. They’re playing for a community, a fan base and for the relatives and friends of those who died that night.”

Mike Hamrick, Marshall athletic director, reminded the crowd Marshall football is much bigger than the game that gets played at the Joan C. Edwards Stadium.

“Nov. 14 is the day that will always be the most important chapter in the single greatest sports story about perseverance and community,” Hamrick said. “As we honor the 75 individuals who lost their loves on Southern Flight 932, it’s imperative we recognize the magnitude of this great sacrifice. Those individuals on that particular day gave Marshall University and the passionate community that supports it a story that’s brought us a sense of togetherness that is not found anywhere else.”

This year’s keynote speaker was Stephen Ward, who was 5 years old when his father, Parker Ward, owner of Hez War Buick in Huntington, died in the crash along with 74 others.

Ward, who lives with his wife, Shari, and two children in Louisville, Kentucky, spoke about how he still feels connected to the university, despite not attending school here.

“There are so many families who are affected by the tragedy on Nov. 14th. We lost brothers, sisters, sons, daughters and I lost my dad,” Ward said.

Ward told a story about bringing his friends from Purdue University to the first home game of the 2015 football season.

“As we left the stadium, they were wearing their Purdue black and gold,” Ward said. “I could barely get them out of the stadium because so many Marshall fans stopped them and thanked them for coming. They said to me that night, ‘We’ve traveled all across the county, and there’s nowhere in the world like Huntington and Marshall University.’”

In attendance was recently selected president of Marshall, Jerome Gilbert, who traveled from Mississippi to experience the ceremony.

“My first impression was that I was overwhelmed with emotion,” Gilbert said. “I almost wept at the ceremony because of the sense of loss and what this means to the university.”

Gilbert said the resilience of the Marshall community to rise above tragedy is a personal lesson he took away from the ceremony, a lesson he said he would apply as president.

The Memorial Fountain was turned off during the ceremony and 75 white roses were laid along it to commemorate each of the who died.