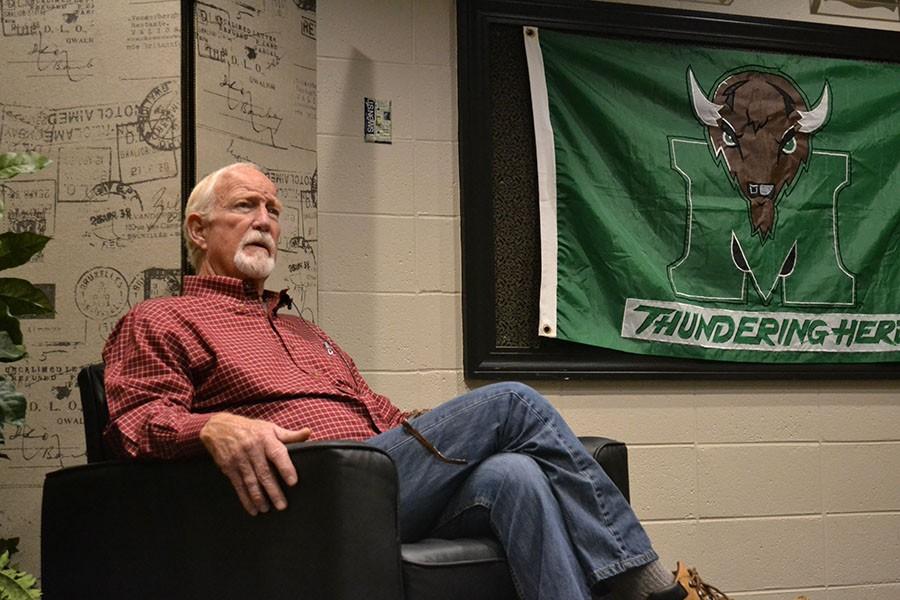 There was a time when Red Dawson had to distance himself from Marshall University and from the game of football.

Dawson, the only Marshall football coach to return to the team after the 1970 plane crash, said it took years before he could attend the Memorial Fountain Ceremony or even watch a football game on television.

Dawson said he credits former Marshall head coach Jim Donnan, who took over the program in 1990, with bringing him back to the program and, ultimately, football.

“When someone had told him that I lived in Huntington still, he reached out to me, personally,” Dawson said. “At first, I thanked him and said ‘I’m doing fine, but I don’t think I’m going to go to football games.’ I hadn’t gone to a football game or even watched one in so long. It was just too painful, too many bad memories. I had nightmares of the crash a lot of nights. It wasn’t easy.”

Dawson, who drove instead of flying on the plane that crashed due to a recruiting trip obligation, said he struggled with survivor’s remorse for a long time.

However, Donnan assured Dawson he would not have to speak with anyone if he came to the game. Donnan simply wanted him to be around the team.

Dawson accepted the offer and has continued being a part of the Herd’s football program over the years.

Dawson said head coach Doc Holliday and Mike Hamrick, the athletic director, have continued the tradition of keeping him around the program and its players.

“He’s more than a former coach,” Hamrick said. “When you look at our success, Dawson is the foundation of that. Look at Marshall football now, the wins, the championships, this wouldn’t be possible without Red Dawson. He came back after the tragedy to begin putting in the hard work of rebuilding the team. ”

Hamrick said he wants Dawson to be around the program as often as possible and to continue making relationships with its players.

“Coach Holliday and I go out of our way to make him feel welcomed,” Hamrick said. “We want our players to know him and know what he did for them to be in the position they are in now.”

Aside from rejoining the program, Dawson said the Warner Brothers film “We are Marshall” has helped him with the healing process.

“I was actually dreading it when they first started talking about the movie,” Dawson said. “I didn’t want anything to do with it. I told them that I just didn’t want to wake up all those demons.”

After some thought, Dawson said he decided to participate with Warner Brothers to ensure the movie was honest and respectful to those who lost their lives.

“It turned out being a saving grace for me,” Dawson said. “It’s getting easier and easier. Life’s been hard but sometimes it’s good.”