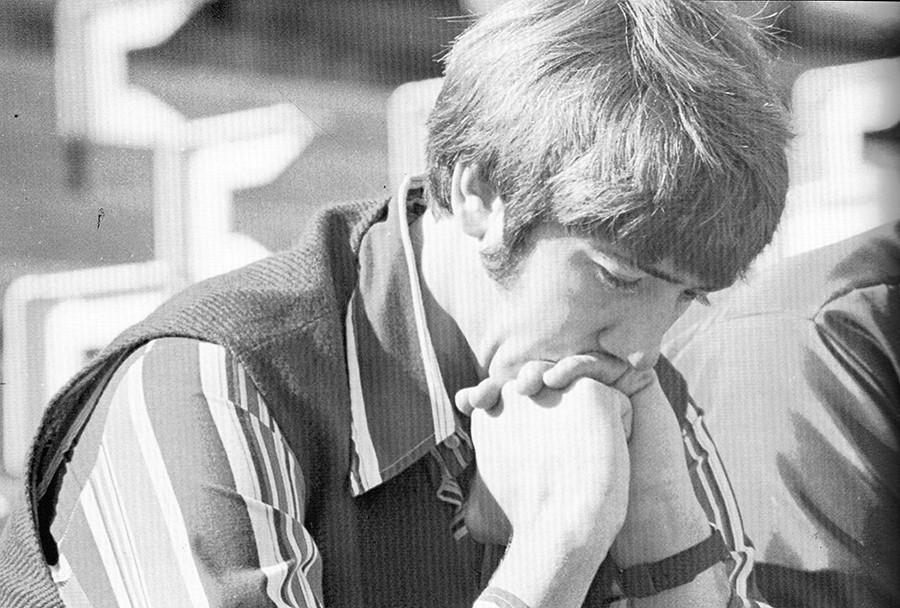 Herd football team manager Eugene Jones, 18, holding his head in his hands during the memorial ceremony following the crash in 1970.

It has been 45 years since the plane crash that killed 75 Marshall football players, coaches and supporters. It has only been in the last 15 years Eugene Jones has been able to talk about the loss of the many friends he made during the fall semester of his freshman year.

At the time of the crash, Jones was an 18-year-old freshman at Marshall, working as an equipment manager for the football team as part of his work-study program.

As the season went on, Jones and the other managers worked with the players on the field, where Jones became good friends with them and the coaching staff.

“It was good because we got to know the players,” Jones said.

Approaching the East Carolina game, Marshall Athletics made the decision to charter a plane for players and community boosters to take to the game.

“When it came time to go to the East Carolina game, Marshall decided they were going to fly down. They were going to charter a plane. It was the first time they’d flown,” Jones said. “They told us that only one manager could go besides the head manager. Another friend of mine (and I) talked about it and we agreed I would go to this game because I had never flown before.”

While on campus on November 11, 1970, a call from home changed Eugene Jones’ life forever. Just three days before he was to step on to Southern Airways Flight 932 on November 14, 1970 from Kinston, North Carolina to Huntington Tri-State Airport, Jones was called home to Hinton, West Virginia attend his grandmother’s funeral.

“A few days before the team left my grandmother passed away and so I went home for the funeral, thus I didn’t make the flight,” Jones said. “Of course, that just changed my life forever.”

Like the entire Marshall community, the news of the crash hit Jones hard, making it difficult for him to come back to school and try to live a normal life. The friends he made that year before school had even started, before he had an opportunity to know any other Marshall students, were now gone with only the memory of them left.

“I stayed away a good while, because there wasn’t any classes, but one of the first days back to classes I was walking across (campus) and come around the corner and here come a girl from Hinton I graduated high school with,” Jones said. “She turned white as a ghost and came up and hugged on me and said ‘I thought you were on the plane.’”

It wasn’t until Marshall unveiled the “From Ashes to Glory” plaque during the 30th Anniversary of the crash that Jones was able to talk about what had happened.

“It was the 30th year (anniversary) of the crash and they were putting this big plaque on the Marshall Stadium that says ‘From Ashes to Glory’ with a big bronze buffalo,” Jones said. “I got home that night and watched ‘Ashes to Glory’ and did alright and right toward the end of it they started scrolling the names of the player, it took 30 years and I finally cried.”

Jones said being able to sit down and watch the documentary brought him some of the closure he needed.

“I felt like a lot of the other guys that didn’t go, there weren’t many of them, you know we felt guilty because all my friends and people I knew were killed and I wasn’t,” Jones said. “I wasn’t one of the players or anything but I was apart of it.”

With the struggle to cope with the loss of his friends, Jones said he kept his faith and told himself that he wasn’t meant to be on the plane and God had another plan for him.

“I had the attitude and was told then the Lord didn’t want me on that plane and that’s why I’m here today,” Jones said.