The Parthenon lost one of its own in Marshall plane crash 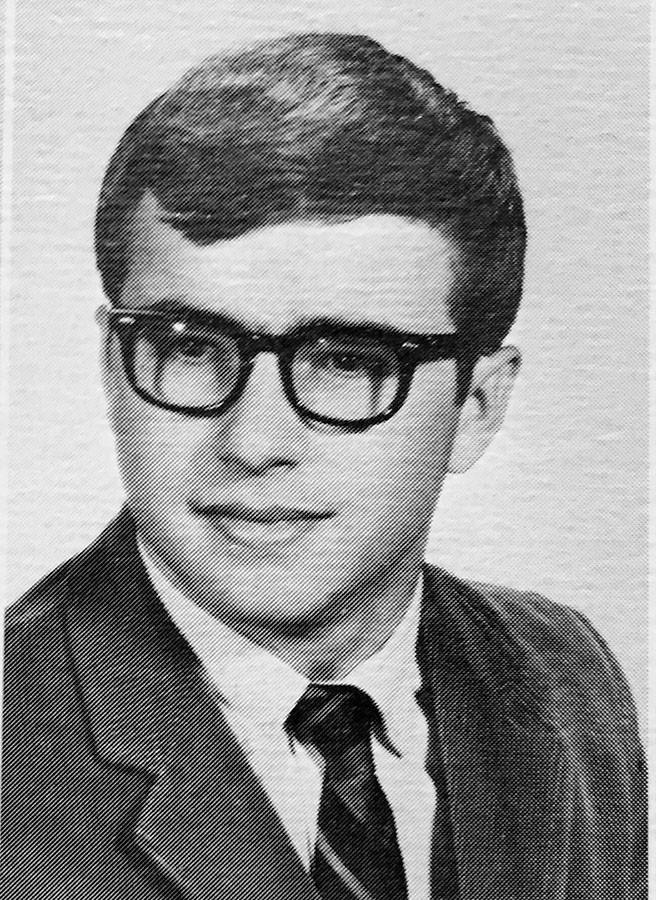 Parthenon sports editor Jeff Nathan, 20, was one of the 75 who lost their life in the plane crash Nov. 14, 1970. Nathan was widely respected by his co-workers, friends and professors.

As Southern Airways Flight 932 made its descent to land at Tri-State Airport, Jeff Nathan was likely pondering how he was going to report Marshall’s 17-14 loss at East Carolina in the university’s student newspaper.

Since the Douglas DC-9 twin-engine jet airliner required about an hour to fly from Kinston, North Carolina to Kenova, West Virginia, the sports editor of The Parthenon likely had his story and accompanying column planned out in his mind. All that would remain would be the labor-intensive task of banging out the words on a typewriter, just as he had done many times before. The date was November 14, 1970.

Nathan’s next entry in his “Hoof Beats” column would be the 30th by the energetic and likeable junior from Parkersburg and Vienna, who had befriended many members of the Thundering Herd football team and coaching staff. Alas, the events of the next few seconds would mean the column would never appear. The time was 7:37 on a rainy and foggy Saturday evening in Wayne County.

Less than two miles distance and 30 seconds’ time from touch-down and traveling at about 160 miles per hour, the plane (tail code N97S) carrying Nathan and 74 other people failed to check its descent and came in 300 feet too low and outside of the preferred flight path. Clipping trees on the way down, the plane nosedived into a wooded hilly area west of the runway near where Interstate 64 crosses the Big Sandy River, burst into flames and exploded in a giant ball of fire, killing all aboard.

The aftermath of the worst air tragedy in the history of American sports devastated Marshall University and its Huntington community home as well as much of West Virginia and even the nation. The pain and melancholy have not departed; even after 45 years, one simply cannot attend a Thundering Herd game or traverse the campus without seeing reminders of and memorials to the disaster.

Parkersburg and Vienna were not and are not, spared from those feelings of profound sadness and loss, for one of their own was taken away that night and a promising young life cut short at just 20 years of age.

The elder son of George and Grace Nathan, originally from Long Island, New York, Jeff Nathan was a 1968 graduate of Parkersburg High School. Jeff and his family had moved to West Virginia in 1963 when George accepted a customer service management position with the Ames Tool Company (locally known as O. Ames). The Nathans briefly lived on 23rd Street in Parkersburg and then moved to Sixth Avenue in Vienna. About a year after Jeff’s passing, the surviving family members moved to Eighth Avenue in Vienna.

“Jeff was a loving brother and a family guy. He had lots of friends,” said Don Nathan, who was 12 years old at the time of the plane crash. “We shared a bedroom for years and fought the way brothers do, but Jeff was a great guy. I remember Jeff sent me a Marshall sweatshirt, for no particular reason and it arrived the day before the plane crashed.”

Jeff Nathan loved sports and dedicated himself to the art of journalism. Those who knew Jeff best were astounded by the amount of high quality work he could churn out and the enthusiasm he showed for the craft. Mentors and colleagues collectively knew he was special and thought he would one day be the sports editor of a newspaper—perhaps even one in a major metropolitan city.

“Jeff quickly adopted West Virginia as his home and was extremely proud of the state and Marshall University,” said Carl Denbow of Athens, Ohio, who was one of Nathan’s faculty advisors at Marshall and runs the Jeff Nathan Memorial on Facebook. “He was a conscientious reporter who always went the extra mile to get the details right. I only knew Jeff a few months, but we became very good friends very quickly. This was very unusual for an instructor and student. We had a lot of common interests and outlooks and we both liked college football.”

The course Journalism 202 (Advanced Reporting) at Marshall University required, at the time, students to file 28 stories per semester or about two per week. Nathan submitted 5-7 per week, more than 100 per semester and was noted as a “regular” in the athletic department and a person who practically lived in The Parthenon newsroom. Nathan, sometimes referred to as “the man with two first names” by journalism advisors, earned multiple “reporter of the week” and “reporter of the semester” honors.

“I knew Jeff was really going to be something and go places,” said Marti Vogel, the managing editor of The Parthenon when she was a Marshall senior in 1970-71. “He had the determination, curiosity and drive to go with the talent. He was one of those remarkable people you just knew was going to be special. I think Jeff was ADHD before there was a name for it. Sometimes, people with the drive Jeff had will turn off other people. But Jeff was so nice and everyone liked him. You knew you could be friends with Jeff the first time you met him.”

Even though Marshall had suffered through a winless 1968 season, a three-win 1969 season, fielded a roster decimated by NCAA sanctions due to numerous violations and seen itself kicked out of the Mid-American Conference, Nathan remained an optimist and in his writings, predicted a Thundering Herd victory in nearly every game.

“Jeff, another advisor (Tom McCoy) and I made football predictions and Jeff ran them at the end of his column,” said Denbow, who placed an engraved brick in honor of Nathan at the foot of the newest memorial at Marshall’s Joan C. Edwards Stadium. “We called ourselves ‘The Thundering Thumb Thumpers’ and made five or six picks of college games of regional interest each week.”

Nathan’s optimism was well served in 1970, for Marshall seemed to be ready to turn a corner under head coach Rick Tolley. Fairfield Stadium (opened in 1927) had finally undergone a major renovation to increase seating capacity to about 18,000, install a new press box and home locker room and install an artificial turf on a lowered playing surface. The Thundering Herd responded with three wins before a hard-fought and controversial loss at East Carolina- one of four narrow defeats on the campaign. Still, Marshall was looking forward to playing arch-rival Ohio University in a season-ending contest and Nathan would have been there, generating his usual coverage and comments.

However, the horrific plane crash the National Transportation Safety Board later ruled was due to descent below minimum altitude caused by either improper use of cockpit instrument data or an altimetry system error, forever changed many lives, including those of the Nathan family and their friends in the Ohio River cities of Vienna, Parkersburg and Huntington. Nathan also had ties to Marietta, Ohio, where, in 1970, he worked as a summer intern for The Marietta Times.

“I have a lot of emotional angst over the plane crash and the loss of Jeff,” Denbow said. “I was the one who suggested he go with the team to East Carolina. I’ve had a lot of guilty feelings over that. It was the first time Jeff traveled with the football team.”

“We were watching television and saw the news ticker go across the bottom of the screen, saying there was a plane down at Tri-State Airport” Nathan said. “At the time, we didn’t know where Tri-State Airport was and it was a while before we received confirmation the plane was the Marshall plane Jeff was on. It was a very traumatic time for us and I think the stress from losing Jeff had a lot to do with our father dying four years later.”

Don Nathan, eight years his late brother’s junior, left the area after graduating from Parkersburg High in 1976 and heading off to Ohio State University.

When it issued a remarkable 20-page special edition four days after the disaster, the staff at The Parthenon left blank the space normally occupied by the text of Nathan’s column, that is, except for a simple “-30-” – the journalistic symbol for the end of a story.

“It was a very difficult time for us,” said Vogel, who is now retired and living in Charleston. “We worked four solid days and, in order to publish the special edition, we had to figure out what to do and how to do it. We really needed Jeff, but he wasn’t there. We were at an absolute loss in trying to find out who was who and who was on the plane and who wasn’t, because Jeff kept all the information on the football team in his head.”

Although Nathan, a fellow sporting the black-rimmed glasses, mustache and prominent sideburns of the day is long gone and rests in peace with his parents (George died at age 57 from a heart attack and Grace passed away from cancer at age 71 in 1992) in plot Q-178 at Mount Olivet Cemetery near the City Park in Parkersburg, his memory and work live on at Marshall, where the School of Journalism and Mass Communications faculty presents the Jeff Nathan Memorial Award to the student they determine is the top reporter at The Parthenon each year. What’s more, there is a strong movement afoot to endow a scholarship in his name at Marshall.

Jeff Nathan’s name, along with those of 37 football players, eight members of the coaching and administrative staffs, the flight crew and charter coordinator, additional fans, supporters and prominent citizens, is etched in a granite cenotaph at a memorial to the tragedy at Spring Hill Cemetery overlooking the Marshall campus, where just under a third of the victims are interred.

Mike Ruben, a 1981 Marshall graduate and former sports editor of The Parthenon, recently recalled, “It was evident Jeff had earned the respect and admiration of the journalism faculty and they often referred to the outstanding example he set for the rest of us.”

Marshall University will mark the 45th anniversary of the tragedy this Saturday before the home football game against Conference USA foe, Florida International. A service will be conducted, speeches will be made, wreaths will be laid and the water flow at the Memorial Student Center Fountain on campus will be turned off and remain so until spring football practice begins.

Rest assured, Jeff Nathan will be there, in spirit, dashing about in a big hurry to get the story- just like he always did.