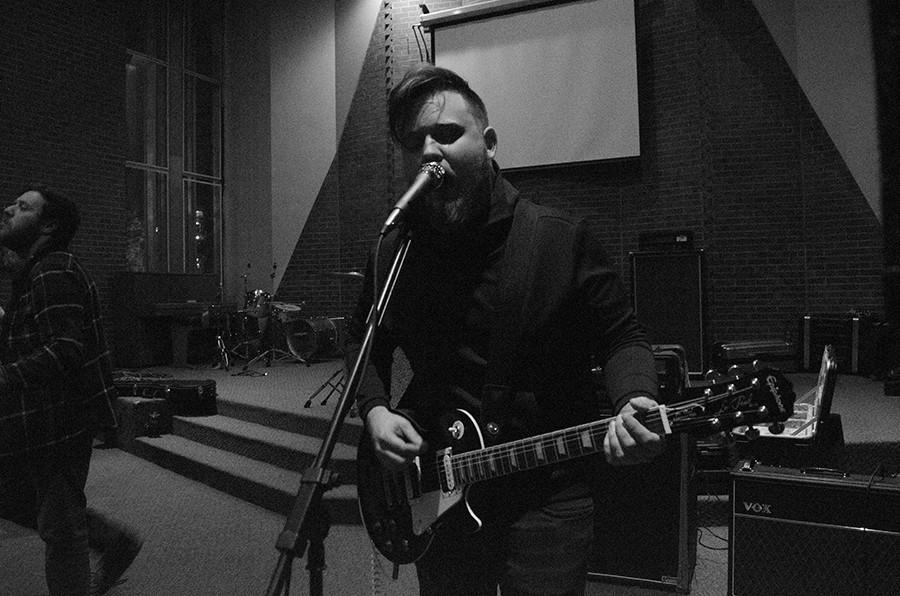 Elliott Blair of Dead Leaves performs at the Campus Christian Center Tuesday as part of a free show that included Embracer, A Story Told, PINE and Dead Leaves on the lineup.

While Dead Leaves and PINE have never been to Huntington, the free show at the Campus Christian Center Tuesday featuring those bands, as well as local acts Embracer, A Story Told and Sly Roosevelt was a first-time experience for everyone involved.

That is, except for Embracer, who played the venue back in 2011 before Dylan Costinteen was a part of the band.

Dead Leaves of Cleveland, Ohio had been in touch with Embracer for booking shows and Huntington happened to fall in the route of the Dead Leaves and PINE tour. Because of family ties in West Virginia, Dead Leaves bassist Alex Tucker contacted Costinteen for a show date.

“Obviously I was going to give them a show,” Costinteen said. “There’s not really anywhere in Charleston, especially on a Tuesday, that would be that great of a turnout, the scene’s not that great right now, not that great of a turnout. I figured Huntington would be a better bet, being that it’s during the school year and if we could have it as close to campus as possible, especially on a Tuesday it would be the easiest way to get as many people out as we could.”

Dead Leaves and PINE are on tour promoting their 7” split released Nov. 6 through Take This to Heart Records and will continue travel through the eastern United States into Canada.

Darlene Deschamps, singer for PINE, said playing at the Campus Christian Center exceeded expectations for a free show in the area.

“It was great, there’s actually a lot more people here than I expected,” Deschamps said. “And the setup is professional.”

PINE has enjoyed its stateside tour so far, coming into Huntington straight from Nashville with Dead Leaves, which band members said they enjoyed exploring.

“We’re playing the tourist role as well as being a touring band,” said Will Lapine, bassist for PINE.

For Dead Leaves, the CCC was just another venue.

“This isn’t surprising,” Tucker of Dead Leaves, said. “We play pretty much anything, any space that will have us.”

While that’s true for Dead Leaves, Huntington band Sly Roosevelt said the show was a contrast to what they’re used to.

“We’re used to playing in dive bars a lot of the time and we’ve played a few other venues like it,” said Sly Roosevelt guitarist, Jyoshua Cade Sanders. “We actually played the Southgate Revival House this weekend, so it also is a church venue. So we’re kind of used to the structures, they’re really good for sound. But we’ve not done a lot of this and it’s really great. There’s a lot of people here today that I’ve not seen before and that’s very refreshing because it lets us know that this is actually a good networking opportunity, like we’re getting to expose ourselves to new music and also get to play with bands we’ve never played before.”

“People can’t get into venues if they’re not 21 or if they don’t like the bar scene,” McDaniel said. “So this is on campus, this is refreshing for us. It’s early, so people are out and about, so that’s weird for us because we’re usually playing at 11 or 12 at night. This is interesting.”

“As far as the scene here goes, I think it was a great turnout,” Costinteen said. “Other places with healthier music scenes this would be an average to not so good turnout, but for our area this is really great.”

Costinteen said he noticed a significant decline in the West Virginia music scene after the Brickhouse, an all-ages music venue in St. Albans, closed in 2010. With the lack of venues, especially all-ages ones, in the area that aren’t bars, the scene suffered tremendously.

“Once that went down, there was no place for bands to play,” Costinteen said. “A lot of local bands ended up breaking up and the few that stayed were bands that ended up starting to tour a lot because they were dedicated to music and really wanted to pursue it. So, that left there not being any shows here and people found other stuff to do and kind of forgot about music being a thing at all. Nobody cared about opening a venue and then finally when something like the Cartref [Cross Lanes] for instance opened up, nobody really cares anymore because they’ve all found other things to do instead.”

While the music scene in the area is on a clear upswing, there is still a lot of work to do especially concerning venues.

“It’s really just a matter of continuously trying to get a show together whenever you can and get as many people there as you can,” Costinteen said. “Eventually people will start realizing that it’s cool again and people will come out, but I think it’s basically persistence. But it’s kind of hard where there’s not many music venues, especially all-ages venues, because bars don’t really seem to be conducive to people who actually want to play music actually for a career, rather than just play music for fun. At a bar it’s more about drinking and being with your friends than going to a show and watching music, versus like this is an all-ages show. There’s no alcohol at all, literally the only reason people are here is for the music.”