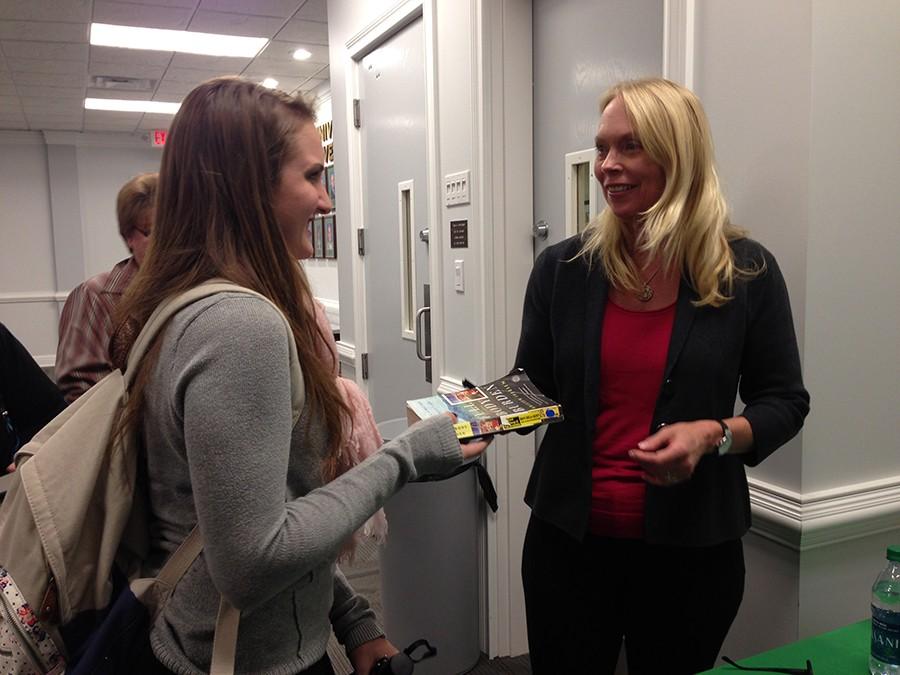 Kristen Iverson signs copies of her book for students attending the Visiting Writers Series event Monday evening in the Shawkey Room of the Memorial Student Center. Iverson read excerpts from her award-winning book "Full Body Burden: Growing Up in the Shadows of Rocky Flats."

The A.E. Visiting Writers Series brought author Kristen Iverson to campus to read excerpts from her award-winning book “Full Body Burden: Growing Up in the Shadows of Rocky Flats.”

Iverson’s book details her childhood growing up in the silences surrounding the secret nuclear weapons facility known as Rocky Flats located between Denver and Boulder, Colorado.

Many of the people living near Rocky Flats made a living by being unknowingly subjected to high levels of plutonium that contaminated the area for miles; the workers were forced to keep the details of their job secret from the outside world.

“People who worked at Rocky Flats were forbidden to talk about the kind of work they did and if they talked about their jobs they could get fired,” Iverson said. “People in the community did not know because of the secrecy surrounding the Atomic Energy Act.”

“Full Body Burden” brings the issues of the area’s devastation to light; from illnesses of community member to near Chernobyl like disasters.

“Where I grew up, our house was right next to a lake. We had horses, dogs and lots of critters; we were outside all the time, my two sisters and I and my brother,” Iverson said. “We rode our horses in the fields, we swam in the lake, we had the kind of childhood, my mother had come from Scandinavian farm family, where you put kids out in the morning and you tell them to come back at supper time. That’s the kind of childhood that I had and I was very grateful for that, it was wonderful. But what we didn’t know when we were riding our horses around the fields there and swimming in the lake was that area was deeply contaminated, the air, the water and the soil with toxic and radio active contamination.”

According to Iverson, Plutonium has a half-life of 24,100 years making it dangerous for 250,000 years. Plutonium is invisible and highly dangerous to humans; people cannot see, taste or feel it, knowing whether or not they are being exposed is almost impossible.

The issues with Rocky Flats are ongoing. Iverson said for this reason, there is no real end to her book.

“There are many sights like Rocky Flats around the country, although Rocky Flats in many way is one of the worst,” Iverson said.

Like many people that lived in that area of Colorado at the time, Iverson herself worked at Rocky Flats until she decided to go to school and get her Ph. D. and become an English Professor.

After leaving Rocky Flats, Iverson said she knew she would write a book about this one day but did not realize it would take 10 years of research before having her book published in 2012.

Iverson’s book “Full Body Burden” has received awards such as the 2013 Colorado Book Award and the Reading the West Book Award in Nonfiction. Iverson’s book was chosen as one of the Best Books of 2012 by Kirkus Reviews, the American Library Association, Mother Jones Magazine and Best Book about Justice by The Atlantic.

Iverson is the current head of the Ph. D. program in Creative Nonfiction at the University of Cincinnati.