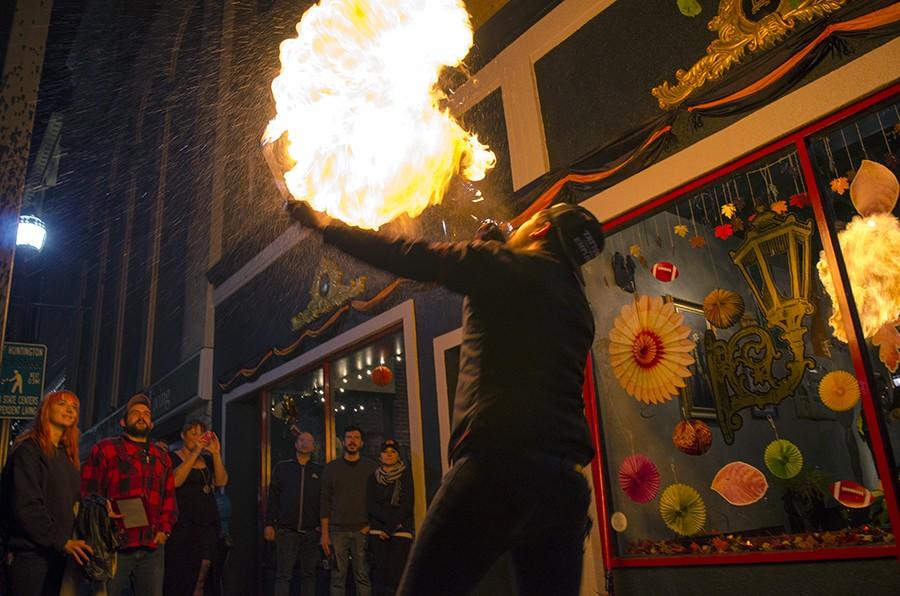 Cory Hughes demonstrates fire breathing Sunday night during the Culture Storm event at The Lantern. The purpose of the event was to show the local talent of artists and performers in Huntington.

The inaugural Culture Storm event brought together more than 150 people, including regional artists, performers and members of the public, at The Lantern bar in downtown Huntington Sunday night.

The event was born out of a desire by local volunteers Zac White, Eric Wilson, Cyndi Fuller and Amanda Winters to showcase underrepresented artistic talent in the area.

“I want people in the area to realize that there are artists who don’t have a proper display to show their work,” White said. “It’s nice that places like The Lantern are willingly just opening their doors and allowing all these artists to come in here and sell their work.”

Cory Hughes, who performed his fire breathing demonstrations for onlookers outside the building, said he appreciated the opportunity to participate in the inaugural event.

“I’ve been breathing fire for about four or five years and professionally for about a year or so,” Hughes said. “All these other people do this stuff all the time on their own. It’s nice to have a place we can get together and share our talents.”

Jimbo Valentine, an artist known around the city for his graphic design work, handling the art for the V-Club and Huntington Music & Arts Festival, said events like Culture Storm allow shy artists to display their work in a relaxed atmosphere.

“It’s great to see people who do art, but would normally keep it at home in their bedroom and not show it, get out and display their stuff,” Valentine said. “There’s no pretentiousness here. It’s just a good time and excuse to get all your friends together. They did a great job at putting this together because I know that what it’s like to manage artists. It’s like herding cats; it takes a little bit of patience.”

Lindsay George, who came from Charleston to support her husband, a tattoo artist, said participating in the event was an opportunity her husband, Chris, would not normally have.

“I’m out here tonight because my husband is a tattoo artist who loves to do art as well,” George said. “In Charleston, tattoo artists don’t really fit into the art scene, so we decided to come down and get his name out in Huntington.”

Eric Wilson, co-founder of Culture Storm, said the turnout for the night exceeded his expectations.

“I’ve been here several times on Sunday evening when it’s been all but a ghost town,” Wilson said. “Right now, we have people milling around, enjoying themselves. There’s food, art, ceramics and the artists are mingling with the public, telling them what went into their work. This is more than what I ever imagined. Culture Storm, alive and thriving, and it was born today.”

Wilson said a fresh batch of artists will be appearing at the next Culture Storm event, which is scheduled for January at the VIP area at Black Sheep Burrito & Brews.