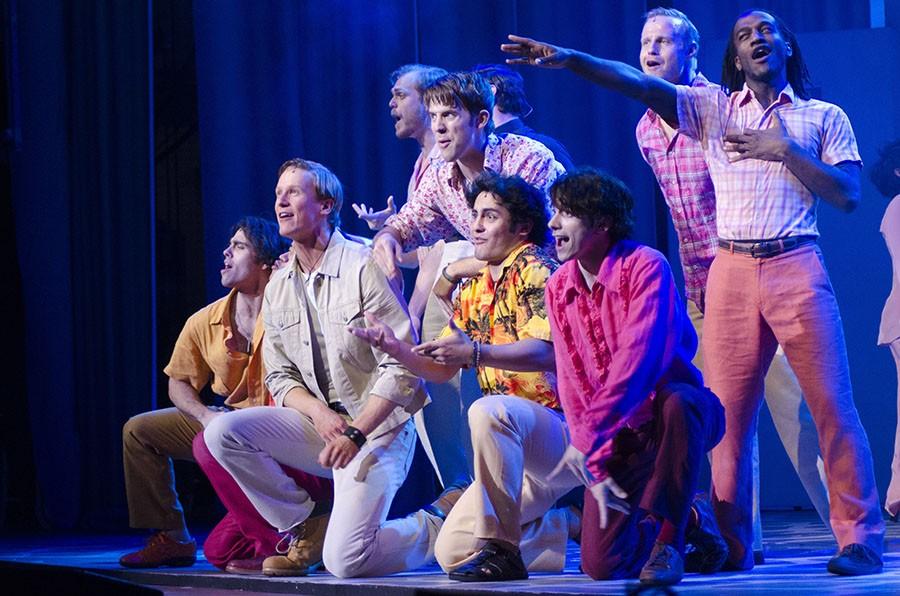 The cast kneels down to sing in one of the finals musical numbers of “Mamma Mia” Wednesday.

The lights dimmed as the Keith Albee Theater became the center of a Broadway show when “Mamma Mia” came to Huntington Wednesday.

Angela Jones, marketing and external affairs director of the Marshall Artist Series, said this performance has been much anticipated and said she looks forward to seeing what all it has to offer.

“Mamma Mia” brings a different sound to the area and enables audience members to have an experience that otherwise may not happen.

“People love seeing the Broadway shows and you know, a lot of times people may have traveled to see shows, but some people don’t really get that opportunity so the opportunity to see big Broadway shows in their home town or in the town where they go to college is a big deal,” Jones said.

People came to the show for many reasons whether it was to see the musical performance or for the memories it brought.

For junior Sami Hannabach, the show was about the remembrance of a family member.

“’Mamma Mia’ is based on ABBA and my Papaw and I shared that soundtrack all the time, so I’m here to listen to it live and because I also like the movie,” Hannabach said.

The Keith Albee continued to be packed throughout the night, as laughter got stronger from the audience.

“Mamma Mia” brought the sights and sounds of Broadway to the Marshall Artist Series and to everyone in attendance.

Chantil Foster can be contacted at [email protected]