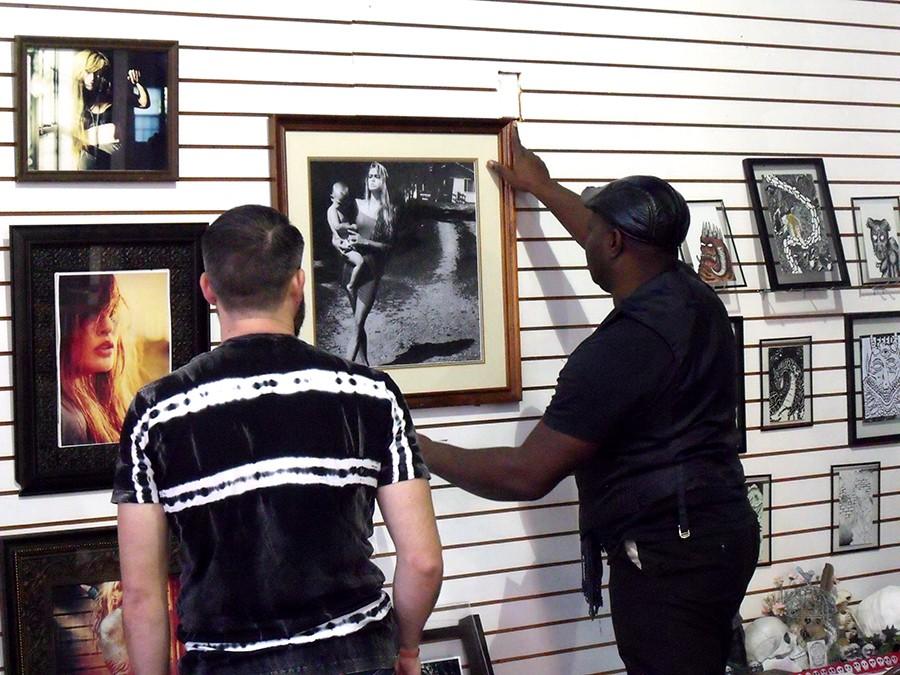 Keyamo Onage (right) , a photographer in the exhibit, hangs up his work with Joe Troubetaris (left) assisting. The art exhibit was curated by Two-Headed Dog Collective, a non-profit organization that creates temporary public safe spaces for the arts in Huntington.

The event was a follow-up to the #1100BAM event May 8th that took place on the 1100 block of Fourth Ave. and featured pop-up shops and live music. #1100BAM was an example of a build-a-better-block event to showcase the ways Huntington can help grow small business.

A pop-up business is one that uses an empty or under-used space for a limited period of time before transferring. Events like #1100BAM and #801BAM use the pop-up concept to demonstrate the potential of unutilized spaces in Huntington.

Bree Shell, a planner for the city of Huntington, said #1100BAM was to get feedback about what is working downtown and #801BAM was a mini-version of the same event, both being concerned with potential.

Jewel City Junction, Inc. is a non-profit corporation working toward safety and development in Huntington. Decker said it aims to achieve sustainability and to accomplish its goals building off the energy of #1100BAM.

The corporation plans to acquire a downtown location, promote a rooftop garden restaurant to encourage healthy eating, establish a mental health first aid training program for first-responders in Huntington and to work with and support Create Huntington.

Minicozzi discussed his personal strategies for development and said what has worked for Asheville that could work in Huntington.

“(Huntington) is about a decade behind Asheville in development right now,” Minicozzi said.

One of the strategies Minicozzi outlined was to get away from the tendency of what he called “fast mode of thinking,” which he said occurs when thought is prompted by a single question. If a city is focused on a specific question, it might overlook more important aspects of the whole. Minicozzi said “fast mode of thinking” is what often occurs at city hall meetings when a quick decision is trying to be reached.

Another area Minicozzi focused his discussion on was the economic aspect of a city.
“A city is a corporation,” Minicozzi said. “And it’s part of another larger corporation: a county.”

Minicozzi stressed the shareholders of a city (its residents) have to be willing to invest in the city in order to get a return on the investment.

Before the keynote address, a meet-and-greet event featured live music by Brad Goodall and an art exhibit curated by the Two-Headed Dog Collective.

Jocelyn Gibson can be contacted at [email protected]