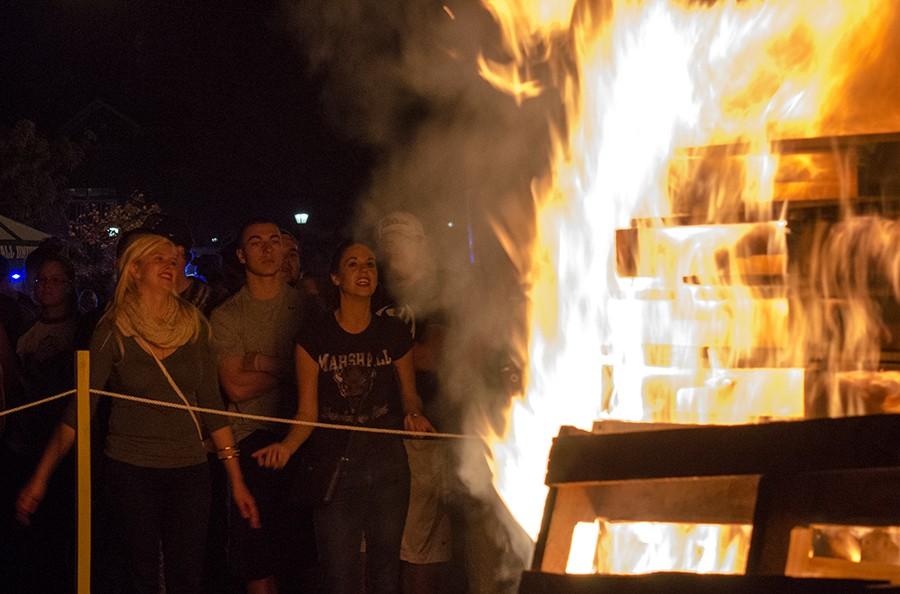 Students participate in the Homecoming bonfire Thursday night next to Harless Dining Hall.

“Our students have been saying this would be really fun,” Tiffany Davis, assistant director of University Communications said. “And that they really wanted to do it and we thought it’s homecoming and we needed more stuff to get students, community, and alumni involved, so it was a great opportunity for us to bring it back. We did it in the ‘80s so it worked out with our homecoming theme.”

Huntington Fire Department said one fire engine and one ladder unit were present. A second engine was in the area as well to keep attendees safe.

“There’s going to be some heat coming off,” firefighter Joshua Blake said. “But the only problem we worry about is embers flying out, or if it gets out of control but it won’t. It’s circled off, it’s as safe as you can get.”

The bonfire began at the conclusion of the annual parade, which was moved from Saturday to Thursday.

“We moved the parade to Thursday because there were so many events on Saturday, and everyone got spread out everywhere,” said Duncan Waugaman, student body president. “We were also able to add this bonfire, and the Rock the Rec basketball event. This is a heck of a turnout. I did not expect anything like this.”

Students were able to bring t-shirts of rival schools in exchange for a Marshall shirt. Some were used in the bonfire, others will be donated to local causes.

“We have a lot of the athletic teams here. Doc Holiday is coming.” Waugaman said. “We’ve got a burn shirt going on. We’ve got some rival school shirts that we’re going to burn, but a lot of them aren’t, they’ll be donated to the Salvation Army and Goodwill. The burning is to entice people to bring them here.”

“This is tradition,” Blake said. “As long as we’re here to supervise, there will not be any issues at all.  We encouraged everybody to come out and have a good time, especially Marshall, this is the heart of our city.”

“We’ve had a lot of participation from students,” Davis said. “A lot of alumni came in today to attend events tonight. A lot will be on campus tomorrow and throughout the weekend.”

Nathan Thomas can be contacted at [email protected]