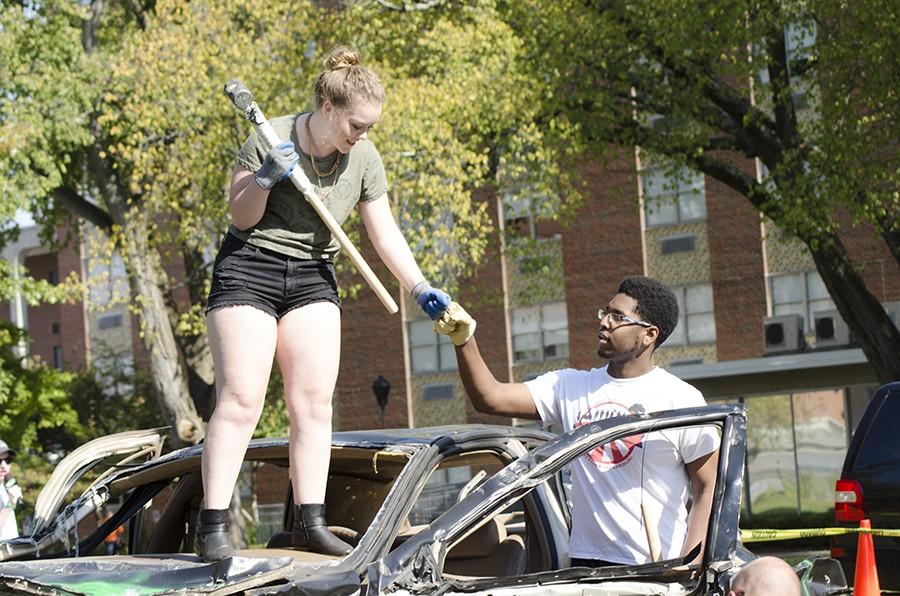 Students had the option of choosing between two different sized sledgehammers and could wreak havoc for two minutes.

The event was originally scheduled to last until 3 p.m., but due to the parade being rescheduled, it was shorted to allow WMUL-FM time to prepare the car to be featured in the parade.

The Car Bash is a favorite among students and this year’s car of choice was a Buick Park Avenue. To coordinate the with the Homecoming game, the Buick was painted in North Texas’ school colors.

The first swinger in the event was history major Jon Decker. Decker said his first swing felt really good and mentioned the car bash is his favorite event.

Decker’s swings caused so much impact he was able to rip the bumper off. If a participant knocked off a piece of the car, they were able to keep it as their own.

“It’s going up in the Rugby House,” Decker said.

“School is so stressful, so I know the people banging up this car will be able to get rid of some of those negative emotions,” Blankenship said. “I wish I wouldn’t have forgotten my wallet so I could participate, but I am strongly considering coming back to campus, just to pay to beat up this car.”

Senior biology pre-medical major Troy Hawkins said he thought the event was cool, but saw how it could be distracting to other students.

“It’s really difficult to focus outside as it is when studying for an exam or just reviewing your notes,” Hawkins said. “The car bash is cool and all, but I feel bad for those girls in Buskirk who are trying to study or sleep, because it’s hard for me to focus outside when it’s going on. My personal opinion is that sleep is more stress relieving than paying money to beat up on an old car.”

Desmond Groves can be contacted at [email protected]